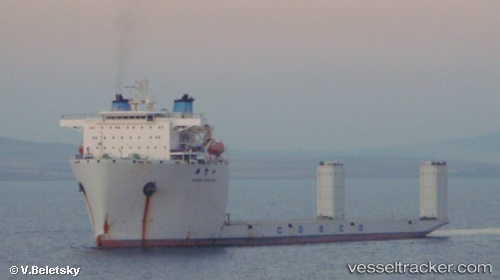 A large steel oil storage tank to be installed west of Shetland as part of Premier’s development of the Solan field has arrived in Lerwick onboard a heavy-transport vessel Xiang Yun Kou, to make use of the port’s deep-water quays and anchorage. The vessel is berthed at Holmsgarth 5 and local engineering and logistics companies have been engaged to prepare the tank prior to it being taken to the field. Around 1 August, the Xiang Yon Kou will move to an anchorage in the port and ballast down for the tank to be floated off the deck of the vessel. The tank will then be transferred to tugs accompanying Thialf, the world’s largest semi-submersible crane vessel, which will install the tank. Dependent on weather conditions, the tank could remain at Lerwick for a short period of time before being towed to the field.

Shell Oil's mobile drill-rig on way from Alaska to Asia

The Noble Discoverer, the massive drillship that is an integral part of Royal Dutch Shell's Arctic oil drilling ambitions, is getting a lift to Asia. On Saturday (March 2), the ship was loaded onto the cargo deck of another vessel, the 708-foot Chinese-flagged heavy lift ship Xiang Yun Kou, which arrived in Resurrection Bay -- visible from the Southcentral Alaska community of Seward -- on Thursday. According to the Seward City News, the Noble Discoverer will now be welded into place for its long trek to Asia. As of Wednesday afternoon (March 6), the ship remained in the waters of Resurrection Bay, and it wasn't clear when it might begin the next step of its journey. A Shell spokesman said he didn't have the particulars of the journey, and Noble did not return a request for comment on Wednesday. Photo report on http://www.alaskadispatch.com/slideshow/photos-shell-oils-mobile-drill-rig-way-alaska-asia

The 708-foot-long Xiang Yun Kou arrived in Seward, Alaska on Feb. 28, 2013, to dry-haul the Noble Discoverer to port in Asia. Now, the 571-foot Noble Discoverer will be taken to a shipyard in Korea for repairs and upgrades after its troubled season in Alaska, a season that led Shell Oil Co. to announce Wednesday that it will suspend its 2013 drilling to assess and service its drill fleet. And to get the drillship from point A in Alaska to point B in Korea, the immense vessel Xiang Yun Kou pulled into the waters near Seward Thursday to dry-haul the Noble Discoverer to its Asian destination. More at http://www.alaskadispatch.com/article/20130228/massive-lift-ship-arrives-seward-haul-troubled-noble-discoverer-drilling-vessel