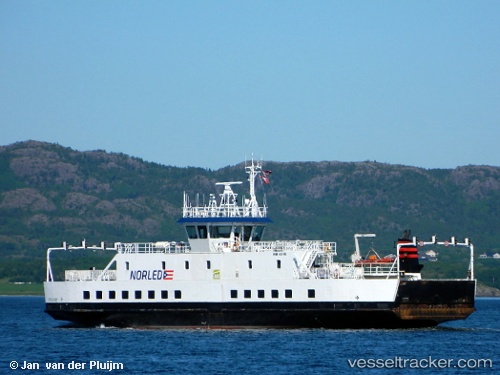 The police has completed the investigation of the fire on the'Ytterøyningen'. The case is closed. The results of the investigation strongly suggested that the cause of the fire was creep currents from a leak of coolant from a cooling module belonging to a battery module. The investigation strongly suggesteds that the fire started in a battery rack when connected to a battery module. The explosion that occurred later happened as a result of gas development in the battery room where the source of the gas was the battery itself. The battery technology on the ferries is relatively new and the police say the investigation has given a lot of new experience. The Norwegian Maritime Directorate has made recommendations that alarms for bridges should be connected to battery packs even when battery operation is not in use. In this case, the fire was notified by the ferry's ordinary fire alarm system. There is also a focus on which extinguishing means are best suited and how they are useful. Changes may be necessary to both electrical safety and safety system. Efforts have been made to increase the competence of seafarers with a view to efforts in incidents with new energy carriers. The Bergen fire brigade has, among other things, taken the initiative to start a competence week.

A seawater fire extinguishing system that had been installed as an additional safety precaution on the 'Ytterøyningen' may have “contributed to escalating” events that led to an explosion that struck the vessel on Oct 11, 2019. It followed an onboard fire the previous evening, according to a preliminary report into the incidents published last week by battery supplier Corvus, but what caused the blast is not yet known. https://corvusenergy.com/fire-onboard-the-car-ferry-ytteroyningen-preliminary-investigation-results/ https://shipinsight.com/articles/a-small-ferrys-battery-fire-deserves-global-attention?mc_cid=e7c412b3c0&mc_eid=cfbd3053d3

Cause of fire and explosion found

The cause of the fire and explosion on the 'Ytterøyningen' has been found, the the battery manufacturer Corvus announced on Dec 12. It was a leakage from a twisted gasket in cooling system of the battery pack. This led to an arc, a kind of electrical voltage, in the battery, followed by an overheating and subsequent fire off the Sydnes ferry dock in Kvinnherad on Oct 10. Why the gasket was twisted, the experts had yet to explain. The alarm started later than it should have done because the battery pack was switched off when the fire started. After the firefighting began, work went on schedule for the first few hours. But early the next morning, completely without warning, a powerful explosion happened, sluggishly in the room with the battery compartment, sending shock waves even to the fire truck on the dock. At least one light of the truck was shattered. There was no one on board the ferry at that time. The investigations have revealed that the explosion is probably due to the sprinkler system with salt water which was installed to increase fire safety. In Corvus' own guidelines for battery installers from 2016 it was stated that the battery should be stored in rooms with a sprinkler system, but it was not clear whether the sprinklers could carry salt water. Corvus stated that they were not responsible for the sprinkler system being installed. The newly installed sprinkler system in the battery compartment was found in order and approved by the Norwegian Maritime Directorate in November 2018. On other electric ferries, air-cooled batteries are mostly used. The 'Ytterøyningen' was the first hybrid ferry with this type of water cooled battery. The system was type-approved as late as April 2019. The manufacturer wasstill confident that the batteries do not pose a greater risk than conventional energy sources on ferries. For the "Ytterøyningen" new batteries have been ordered that will be air-cooled and not water-cooled. The final conclusions will be established once the police has finished its investigations which was expected to happend in January or February 2020, according to the Kvinnherad sheriff's office.