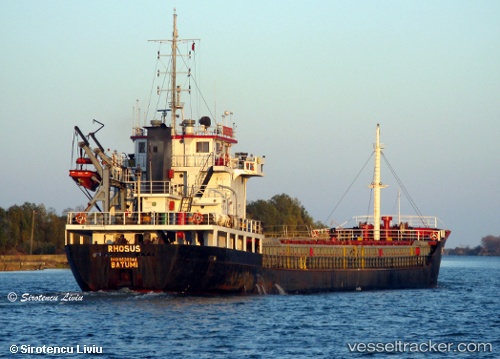 On Aug 4, 2020, the cargo of 2.150 tons natriumnitrate of the Moldawian flagged cargo m/v 'Rhosus', 1900 gt (IMO: 8630344), which was stored in warehouses in the port area of Beirut exploded, killng at least 135 people, injuring several thousands, making hundred thousands homeless and devastating the port and large parts of the city. The ‘Rhosus‘ had entered the port on Sep 23, 2013, enroute from Batumi to Beira due to technical trouble. The ship was detained following a PSC and abandoned by its owners. Only the Russian captain, two engineers and the bosun remained on board and could only be repatriated after lengthy diplomatic struggles. The cargo was unloaded and stored in warehouses in the city, the ship remained abandoned in port.

Crew kept as hostages on a floating bomb

General cargo vessel Rhosus called Beirut, Lebanon, in October last year. Vessel loaded with ammonium nitrate was destined for another country, the reason she called Beirut is unclear, maybe for supplies or due to some mechanical trouble. Rhosus was detained after PSC inspection, which found a number of deficiencies. Since then vessel is stranded in Beirut. By now only four crew stay on board – Master (Russian nationality), Chief and Third Engineers and Bosun, all of them Ukrainians. Vessel was owned and operated by Mr. Grechushkin Igor, Russian citizen now Cyprus resident. Rhosus actually, is abandoned – owner doesn’t communicate, doesn’t pay salaries, doesn’t provide supplies. Owner of the cargo declared abandonment, too. Beirut authorities don’t permit the remaining crew to leave the vessel and fly to home. The reason is obvious, port authorities don’t want to be left with abandoned vessel on their hands, loaded with dangerous cargo, explosives, in fact. Why don’t they want to arrest vessel with cargo, to release the crew and replace it with temporary local crew, is unclear. Russian and Ukrainian authorities do nothing, while as it seems, their involvement is a must, in order to achieve some kind of agreement with Beirut authorities, and work out a joint plan either to replace the crew with locals unconditionally, or finance the crew and vessel until she’s auctioneed.Source: news.odin.tc Voytenko Mikhail