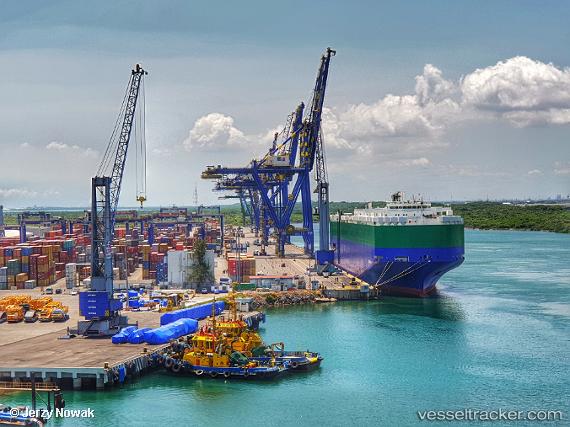 Kalmar, part of Cargotec, has signed a contract to supply Infraestructura Portuaria Mexicana (IPM) with two ship-to-shore (STS) and three rubber-tyred gantry (RTG) cranes for the IPM Altamira terminal. The order, which also includes Kalmar SmartPort process automation solutions for the RTGs, was booked in Cargotec’s 2019 Q3 order intake with handover scheduled to be completed during Q1 of 2021. The IPM Altamira terminal is located on the Gulf of Mexico, in the state of Tamaulipas. The terminal’s current equipment fleet already includes one Kalmar STS crane, eight Kalmar RTGs and a variety of Kalmar mobile equipment such as terminal tractors and forklifts. The Kalmar STS cranes will be Super Post-Panamax size with an outreach of 21 container rows and have twin-lift capability with a capacity of 65 tonnes under the spreader.

03/03/2017 The Mexican petrochemicals port of Altamira, and the principal port for the nation’s growing imports of oil products, Tuxpan, were closed to shipping early Thursday by high winds and heavy seas on Mexico’s northern Gulf Coast, the Ministry of Communications and Transportation reported. All other Mexican oil and petrochemicals ports were operating normally, the ministry added. Two ships are due to arrive from Texas in Tuxpan Friday, one has a load of LPG from Houston, the other is carrying unspecified oil products from Beaumont, according to the port’s website. An official at the harbor master’s office in Tuxpan told S&P Global Platts that no information could be given on how many ships are due to arrive or leave the port. Source: Platts

Cargo volumes through Mexican ports increased by 5.5 percent in 2016, outpacing its two North American Free Trade Agreement counterparts, despite the weakening peso, gas price hikes ,and transportation-link blockades. Yet the year ahead may be even more difficult for Mexico, given the uncertainty over its trade with the United States, and will likely be far tougher than for its counterparts. Under normal circumstances, solid 2016 figures would mean Mexico’s logistics industry is entering 2017 with a promising hand, especially given the federal government’s vigorous commitment to spend $5 billion on upgrading the port system. Port improvements set to come online in the next 12 months include a new terminal built by APM Terminals that is set to open on Feb. 27 at the Port of Lazaro Cardenas; a new rail tunnel at Manzanillo to open by the end of the year; and a continuing construction project at the nation’s largest port on the Gulf of Mexico, Veracruz, that is planned to increase its 900,000-TEU capacity five-fold by 2030. Mexican officials recently called Veracruz the nation’s biggest infrastructure investment in 100 years. http://www.joc.com/port-news/international-ports/port-l%C3%A1zaro-c%C3%A1rdenas/mexican-port-growth-outpaces-us-canada_20170215.html