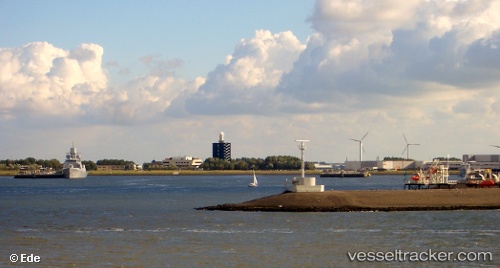 On the 9th of September 2019 the work for the contract “Dredging Het Nieuwe Diep”, commissioned by the Port of Den Helder, has started. Dutch Dredging is expected to carry out the remediation of 200,000 m3 of partially contaminated spoil until mid-December. The survey vessel “Hydrograaf” started the pre-dredge survey on the 9th of September, a so-called “baseline measurement” of the work. The work will then be carried out in 3 phases. In Phase 1, a bed leveller equipped with a so called dirt-plough will be employed. This is due to the fact that the top layer of silt contains a considerable amount of soil-foreign material. The specifically developed dirt-plough consists of long thin spikes that sink through the layer of silt and rake the dirt from the soil. The dirt will be ploughed to free locations where it can be dredged by means of a grab dredger and will be discharged into skips on the quay for removal and disposal. In the Phase 2, a bed leveller, trailing suction hopper dredger and a grab dredger will subsequently commence with the dredging works to the north and south of the Moorman bridge. They will restore the required depth. During Phase 3 the contaminated sediment will be removed. This phase is carried out by a grab dredger and several hopperbarges. The dredged material will be loaded in to the barges, which will transport the sediment to a depository for polluted sediment.

Kooyhaven, the new regional port-related business park in Den Helder, has been officially opened. The first company that has confirmed its position in the Kooyhaven inner harbor is Glomar Offshore. The company operates a diverse fleet of purpose-built offshore support vessels and is regarded as a prominent player in the offshore market. Speaking about the development, Glomar Offshore CEO Klaas Weij comments: »With this expansion, we can offer even more service to both the oil and gas, and the wind industry.« Glomar Offshore is extending its activities to Kooyhaven with the establishment of warehouses for minor vessel repairs and mobilisations for the wind industry. »The arrival of Glomar clearly shows the benefits the whole offshore market can gain by establishing their activities in a forward-looking business park as Kooyhaven,« says Jacoba Bolderheij, Port of Den Helder Director. http://www.hansa-online.de/kooyhaven-in-den-helder-officially-opened/?p=59259

Offshore Energy 2010 Exhibition & Conference which will be held for the third time on Thursday 7 October 2010 at the Old Navy Yard Willemsoord in Den Helder, the Netherlands, is larger than ever. The exhibition, which focuses on the international offshore energy industry, is the only event in the Netherlands which combines an extensive exhibition with a conference program on the latest offshore developments and markets. The exhibition has attracted more than 200 exhibitors this year, more double the number at the first event in 2008. With an extra hall, a exhibition tent and a comprehensive conference program with up to nine individual sessions running concurrently with the exhibition, the organization, Navingo BV, expects more than 3,000 visitors. Source: offshore energy 2010, http://www.offshore-energy2010.com/