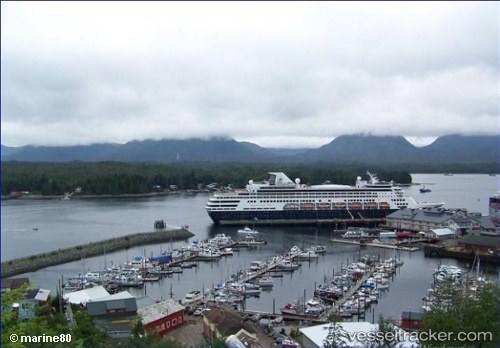 The Ketchikan City Council voted Thursday to start negotiations with Ketchikan Dock Co. on ways to reconfigure Berth 4 of the downtown dock to accommodate larger ships. Ketchikan Dock Co. leases Berth 4 from the city. That berth would be the easiest and least expensive of the city’s four cruise ship berths to expand, according to a study the city commissioned. There were some concerns about expanding it, though. Some local business owners were worried about how the project might affect their waterfront properties. https://www.krbd.org/2017/08/18/city-start-negotiating-berth-4-expansion-larger-ships/

Substantial repair work for Berth 3 at the port of Ketchikan was finished Tuesday afternoon — almost one week ahead of schedule — and the facility was able to receive cruise ships Wednesday. The Celebrity Infinity was being docked just before 2 p.m. June 3, when it scraped along part of the berth, damaging breasting dolphins and catwalks and puncturing the ship's hull above the waterline. Ketchikan City Manager Karl Amylo awarded a $928,580 repair contract June 7 to Anchorage-based Turnagain Marine Construction. The contract had a July 5 completion deadline. http://www.adn.com/alaska-news/2016/07/01/cruise-ships-return-to-ketchikan-dock-damaged-in-june-collision/

Ketchikan will have about 30,000 fewer cruise ship passengers this summer after technical issues will prompt one line to cancel 15 port calls. The Carnival Cruise Lines ship Miracle had 20 port calls scheduled this summer, the Ketchikan Daily News reported. But the ship has a technical issue that will lower its top speed from 21 knots to anywhere between 18 to 20 knots. The Miracle will make port calls in Ketchikan as originally planned on May 4, May 11, May 18, Sept. 7 and Sept. 16, according to the Ketchikan Visitors Bureau. But 15 other port calls between May 25-Aug. 31 have been canceled. The Miracle carries 2,124 passengers, according to the visitors bureau, and was expected to bring 42,480 passengers to Ketchikan. That number has been cut to 10,620 with the 15 canceled port calls. Officials have adjusted the total projected number of cruise visitors to Ketchikan this year to 850,377, down from 882,237.