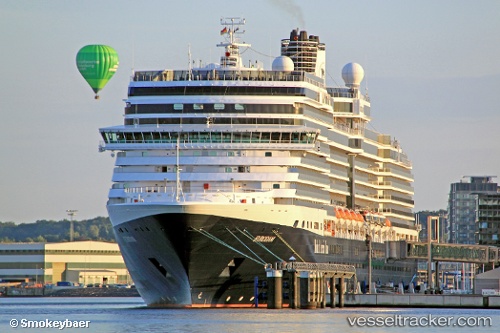 While sailing in the Java Sea off Indonesia, the 'Eurodam' M came upon a capsized Indonesian fishing boat with four crew members clinging to it. The boat containing a crew of 16 had developed problems four days ago and had subsequently capsized. The crew had attempted to swim for shore, a distance of 15 miles. When some realized they were unable to make it, they swam back to their capsized boat. The cruise ship launched their fast rescue boat and was able to pick up and rescue six crew members, two of them located a distance of one mile away from their fishing boat. Ten crew are still missing. The six rescued fishermen were transferred to an Indonesian Coastguard station.

878 Indonesian crew members have been evacuated from the 'Eurodam' by an Indonesian Military team at Tanjung Priok Port, Jakarta. In the first phase on June 17, 434 crew members disembarked, while the remaining 444 crew members disembarked on June 18. The cruise ship had departed from Singapore to Bali before heading to Jakarta. It anchored about 2 to 3 miles from the Jakarta International Container Terminal II (JICT II) at Tanjung Priok Port. Authorities have not confirmed whether any suspected COVID-19 cases had been reported on board, but the team sprayed disinfectant on the evacuees as soon they disembarked at the port. The crew members who disembarked on June 17were taken to a hotel in Kemayoran, Central Jakarta, to undergo swab tests and follow the COVID-19 protocols, which include self-isolation and PCR [polymerase chain reaction] tests. If they test positive, they will be taken to the hospital. If they are negative, they will be allowed to go home. The crew members who disembarked on June 18 were taken to two different hotels.

The "Eurodam" got stuck in San Diego for 24 hours on April 29, 2019, after a bunch of illegal fishing nets got entangled in the azipods as she returned from her latest cruise to Hawaii. Scuba divers were called to cut away the nets which took all day t. The ship was due to sail to Seattle to begin her summer Alaska cruising season. The cruise line said that this delay will not impact any of her sailings.