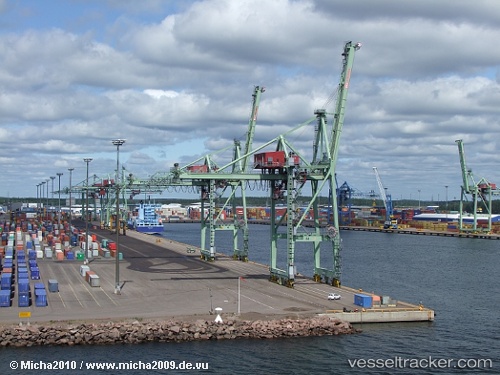 Unifeeder will launch a new fixed day weekly service on Gdansk, expanding our service from Poland to Kotka and St Petersburg. The first call will be 13.05.2017 and the schedule will be as stated below: This service will provide very fast transit time to/from Kotka and St Petersburg for feeder cargo that routes via Gdansk. The service will also facilitate regular empty repositioning from Poland to Finland and Russia. Finland and Russia will then have multiple gateway options within the Unifeeder network as company will be able to offer transhipment connections over Gdansk / Hamburg / Bremerhaven / Rotterdam and Antwerp.

Kalmar, part of Cargotec, has received an order from Suomen Satamatekniikka Oy, a subsidiary of Steveco, for four diesel-electric straddle carriers, ten heavy-duty terminal tractors for RoRo handling, four light forklift trucks and two heavy forklift trucks. Delivery will take place during the latter part of 2016 and into quarter one, 2017, the company said in its press release. Steveco, a leading port operator in Finland, employs approximately 700 people and has annual revenues of close to EUR 140 million. The company operates four sea ports in Finland: Mussalo and Hietanen in Kotka, Hamina and Vuosaari in Helsinki, which are optimally located on the main cargo routes in and out of Finland and Russia. The new machines will join an already extensive and varied fleet of Kalmar equipment including 39 straddle carriers, 50 terminal tractors, 80 forklift trucks and 10 reachstackers. The order comprises four Kalmar ESC440 straddle carriers, ten Kalmar TR618i terminal tractors, four Kalmar DCF80-6 -light forklift trucks with a lifting capacity of eight tonnes, and two DCG180-12 heavy forklift trucks with a lifting capacity of 18 tonnes.

Passenger Port of Saint-Petersburg «Marine Façade» is set to launch passenger ferry link between Saint-Petersburg and Kotka by 2017. According to IAA PortNews correspondent, an agreement on cooperation between Marine Façade PLC, HaminaKotka Oy and Cursor Oy (developer) was signed on December 9, 2015, in Kotka (Finland) in the presence of Kotka Mayor Henry Lindelöf. The agreement was signed within the framework of the cross-border cooperation programme “South-East Finland – Russia 2014-2020”. Expected passenger traffic – 150,000 persons per year. Having signed his agreement Marine Façade can apply for a EUR 2.5 mln grant from EU for reconstruction of RF border check point in order to change its classification from passenger to freight and passenger by 2017. http://en.portnews.ru/news/211330/