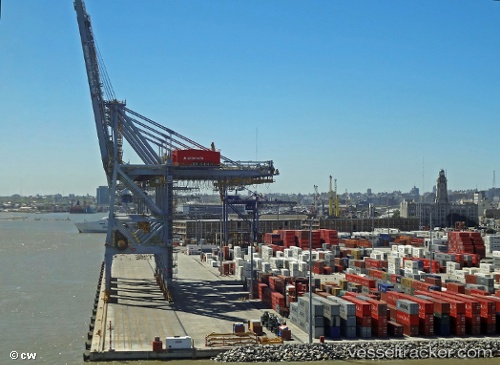 Shandong BaoMa Fisheries Group has shelved plans to build a port in the Uruguayan capital Montevideo that could accommodate 500 Chinese vessels, amid legal complications and strong opposition from local residents and environmental organisations. The US$200 million project, which included a free trade zone, shipyard and fish processing and freezing plants, on a private 28-hectare site in Punta Yeguas, a mostly rural area with a public park, required a change in the legal designation of the land.

APM Terminal Inland Services Uruguay (also known as Montevideo Port Services SA) have made large steps towards becoming emission free as 648 solar panels were turned on this month. The solar panels are capable of producing 228.6 MWh per year, enough to meet 90% of the facilities entire annual consumption. The switchover to the renewable energy source will reduce Inland Services Uruguay’s CO2 emissions by approximately 50 tonnes per year. According to the United States Environmental Protection Agency it would take around 1,300 seedling trees 10 years to absorb this amount of CO2.

Mediterranean Shipping Company (MSC) has sought permission to withdraw a proposal it put forward to create a second container terminal in the Port of Montevideo in Uruguay. A committee set up by the Administración Nacional de Puertos, or National Ports Administration (ANP), to analyse the project is now having to decide whether the representative of MSC that wants to discontinue is legally the same person that submitted it in the first place, and whether they have the power to withdraw the original request. The formal submission was made to the ANP on January 17 this year, for what would be a multipurpose container terminal. A technical commission composed of officials from the commercial, legal and operational areas of ANP was then set up to prepare a feasibility study within 90 days, allowing them to say in mid-May whether the project made financial sense or not. The original move was seen by some as a means for MSC to put pressure on Katoen Natie to sell its existing container terminal at a discount, since the Belgian operator had earlier announced it wished to withdraw from the Port of Montevideo. Source: Port Strategy