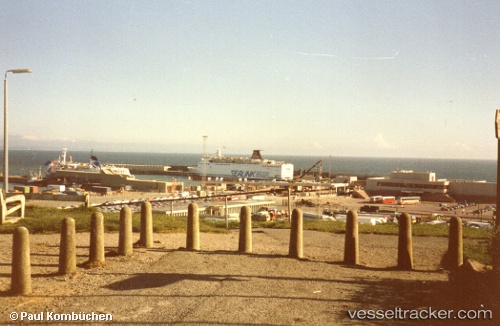 Nine male refugees discovered huddled inside the back of a truck that arrived at Rosslare Port, Co Wexford, this afternoon are in a stable condition in hospital. SHARE GO TO The Irish haulage truck carrying the refugees, all adult males, came off a ship from Cherbourg at around 3.30pm. The refugees had been hidden inside the trailer for at least two days. All nine found by authorities are in a stable condition and have been taken to Waterford Regional Hospital to undergo medical assessment. Authorities say none of the stowaways are believed to be at risk of long-term injury or death. Gardai are trying to establish their identities and interpreters have been deployed. Responding to the situation, Verona Murphy, president of the Irish Road Haulage Association said the government are “very fortunate” that they are not dealing with “mass deaths”. “We are so glad today that we’re not dealing with eight or nine dead migrants. The shipping route from Cherbourg to Rosslare is very long. They were contained within a container with a serious lack of oxygen so the threat to life would have been grave ,” she said. http://www.independent.ie/irish-news/news/nine-refugees-were-hiding-for-two-days-in-truck-at-rosslare-port-before-they-were-discovered-34492815.html

County Wexford is counting the cost after the planned visit of the German cruise ship Albatros was called off because of bad weather. SHARE The ship, with 900 passengers on board, was due to drop anchor off Rosslare Port last Wednesday, however, with a strong south-westerly blowing and a dire weather forecast, the visit was cancelled. 'We could't have allowed it to happen, the wind was just too much,' said Rosslare Port Captain Aedan Jameson. He said the fact that it wouldn't have been safe for the passengers to have been transferred from the ship anchored a mile offshore, underpinned the need for more investment at Rosslare Port and the need for a berth capable of handling ships with deep draughts. 'A lot of people had done a lot of work and it's very disappointing,' he said. The next cruise ship due at the port is the Braemar which is scheduled for July next year and which, because of its smaller draught, should be able to berth in the port.

rosslare Europort is in the hunt for investors willing to commit up to €40 million for a major upgrade that will equip it to handle the ships of the future. SHARE Iarnród Éireann, the Port Authority for Rosslare Europort, announced to port staff last week that it is to undertake an assessment of market interest in a concession with a third party to operate the Port. The assessment follows a study by Indecon Consultants for the Department of Transport, Tourism & Sport which examined strategic options for the future of the Europort, to maximise its potential and address future investment requirements. The report recommended that the Europort remain in the ownership of Iarnród Éireann, but with a long term concession with a third party. http://www.wexfordpeople.ie/business/rosslare-port-looking-for-investors-31255129.html