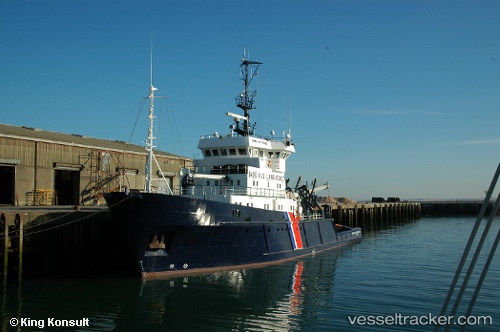 The 'Abeille Languedoc' will be demolished in Brest. Chosen by Les Abeilles International (Econocom group), Navaleo will carry out the deconstruction of the tug, which , coming from Cherbourg, arrived in basin 5 in Brest on Aug 2, 2022. On Aug 3 the tug went alongside the 'Abeille Bourbon' for a transfer of equipment and fuel. Navaleo technicians (Les Recycleurs Bretons) will take charge of the ship to begin dismantling operations, before entering dock No. 1 for cutting. Reports with photos: https://www.ouest-france.fr/bretagne/brest-29200/l-abeille-languedoc-sera-deconstruite-a-brest-6df7cd24-1306-11ed-9961-af14b1a8f8fc https://www.letelegramme.fr/finistere/brest/l-abeille-languedoc-sera-deconstruite-a-brest-03-08-2022-13135704.php https://www.meretmarine.com/fr/marine-marchande/l-abeille-languedoc-va-etre-deconstruite-a-brest

In the morning of May 9, 2022, a gendarmerie patrol reported a boat in difficulty off Pas-de-Calais to the CROSS Gris-Nez. After analyzing the situation, the CROSS deployed the patrol boat 'Scarpe' from Boulogne-sur-Mer and the 'Abeille Languedoc' to the scene, which picked up 56 people on board and dropped them off at the port of Boulogne-sur-Mer, where they were taken care of by the border police and the Pas-de-Calais departmental fire and rescue service. Report with photo: https://www.premar-manche.gouv.fr/communiques-presse/operation-de-recherche-et-de-sauvetage-d-une-embarcation-dans-le-pas-de-calais

In the night of April 15, 2022, the CROSS Gris-Nez identified several boats in difficulty in the Strait of Pas-de-Calais. The CROSS then engages several nautical means to assist. The PSP 'Pluvier' from Boulogne-sur-Mer rescued 39 boat people, who were dropped them off at the port of Boulogne-sur-Mer. The 'Abeille Languedoc' sailed from Leffrinckoucke to provide assistance to 33 boat people. Once recovered, the castaways were dropped off at the port of Boulogne-sur-Mer too. The castaways were taken care of by the border police and the departmental fire and rescue service then.