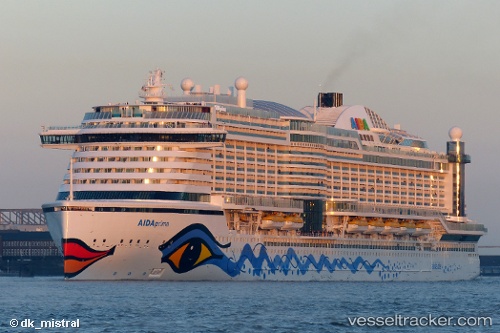 Attempt to reach Hamburg ahead of storm failed

Off Heligoland the "Aidaprima" was battling with the hurricane force winds of the storm Ylenia on Feb 17, 2022, sailing in circles on the North Sea. Since the ship was caught up in the storm on its way from Le Havre to Hamburg, it was no longer able to enter the Elbe in the evening of Feb 16. It had previously canceled the visit to Southampton and attempted to reach the protective estuary of the Elbe at full speed of 20 knots and sail into Hamburg. The storm was faster - in the afternoon the "Aidaprima" turned around at the Elbe 1 pilot station and slowly proceeded to an area north of Helgoland. The container ships “Ever Gentle”, “YM Wellness” and “CSCL Saturn” were also waiting out the storm there.

Short time after the 'AIDAPrima' sailed from Cherbourg on Jan 10, 2022, at 8 p.m. en route to Le Havre, the ship returned to the quay before having left the port due to a medical emergency on board. An ambulance was called, but the passenger died due to a cardiac arrest. With a delay of 2,5 hours, the ship continued its voyage and arrived in Le Havre on Jan 11 at 7.10 a.m.

On Dec 4, 2021, at around 10 p.m., the MRCC of the DGzRS was notified of a sick one-year-old girl on board the "Aidaprima". The child had to be medevaced and taken to a hospital for further medical treatment. The lifeboat 'Hans Hackmack' was mobilzed from the station in Cuxhaven. It took three paramedics and an emergency doctor from the Cuxhaven fire department on board. Just a few minutes later, she went alongside the “Aidaprima” in the Elbe rdzistx. The child and his parents were transferred onto the lifeboat through a hatch in the side of the cruise ship provided for this purpose. On board, the paramedics and the doctor took care of the little girl. A little later the lifeboat reached the ferry port in Cuxhaven. An ambulance was already waiting to take the child to a hospital for further observation. At the time of deployment, there were easterly winds with up to four Beaufort wind force and a swell of around one meter. Report with photo: https://www.seenotretter.de/aktuelles/seenotfaelle/seenotretter-im-einsatz-fuer-erkranktes-kleinkind