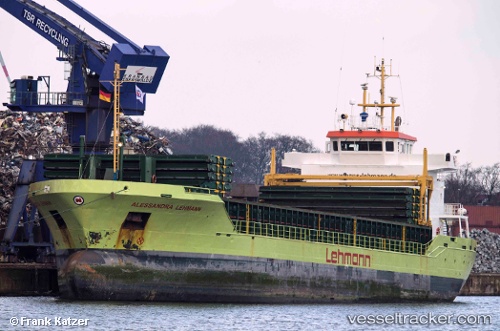 The 'Alessandra Lehmann', en route from Aberdeen to Bilbao with 3977 metric tonnes of scrap steel on board, was NUC after an alarm indicated a high engine temperature, shortly after sailing from Aberdeen, in position 57 05 24.0 N, 001 54 36.0 E, on Oct 30, 2019, at 4.40 p.m. The alarm indication occurred at approximately 4.20 hrs, and the vessel stopped to carry out repairs before resuming the voyage with an ETA at Bilbao as of Nov 4, 7 a.m.

Engine failure on the Elbe

On July 9, 2019, at 4.30 p.m. the "Alessandra Lehmann" suffered a complete blackout while approachign the locks of the Kiel Canal in Brunsbüttel enroute from Husum to Tärnu off jetty 4. The ship dropped anchor on the Elbe roads at buoy 85A and was taken in tow at 6.30 p.m. by two tugs to the South Quay in in Brunsbüttel where it was detained by the relevant authority. The company Cornels was called to carry out repairs, and after a class inspection the ship was allowed to continue the voyage on July 10 at 11.25 p.m. with an ETA as of July 13, 2 p.m.

The "Alessandra Lehmann" was being adrift or stuck in ice since the afternoon of March 10, 2018, in the Sea of Aland. The ship was enroute from Hallstavik to Tallinn. The Estonian tug "Atlas" (IMO: 7330337) which had just delivered the bulkcarrier "Glory Hongkong" in Tallinn left port and headed to the scene. It took the "Alessandra Lehmann" in tow to Tallinn, arriving there on March 13 at 1 p.m.