ALLURE OF THE SEAS 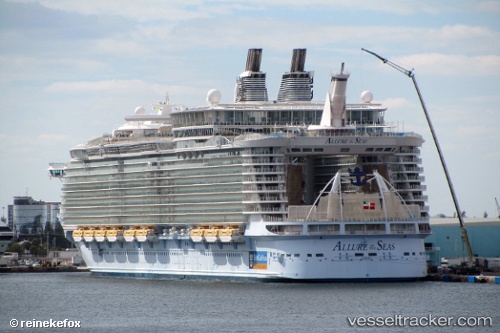 The Ministry of Health has finally lifted the ban on entry to Cádiz for the 'Allure of the Seas' which will arrive this weekend at the Navantia Cádiz to undergo repair work, as originally planned. The ship had on board about 300 people from different parts of the European Union. The central administration had argued that the crew exceeded the stipulated limit of 40 crew members by the state of alarm legislation. However, the BC Tours consignee, in charge of carrying out the procedures, has argued that with such a small number it was impossible to operate on that ship, so finally, and after the mediation of State Ports, the Merchant Marine and the Spanish Association of Consignees, Foreign Health has authorized the entry of the cruise ship into the shipyard with a crew of 300 people. The ship had made a technical stop in Gibraltar on April 14 to transfer crew to the cruise ship 'Jewel of the Seas'. Both ships called exclusively to refuel, stock up, unload garbage and transfer crew. No member of the crew may disembark from the vessels, except for those persons who were going to transfer from one vessel to another, and no employee was allowed to board the vessel during its brief stay in Gibraltar.

The Aug. 24 sailing of the "Allure of the Seas" has been extended until Sept. 4, with extra stops in Honduras and Mexico. The Sept. 1 sailing was shortened and will be a four night cruise departing Sept. 4.