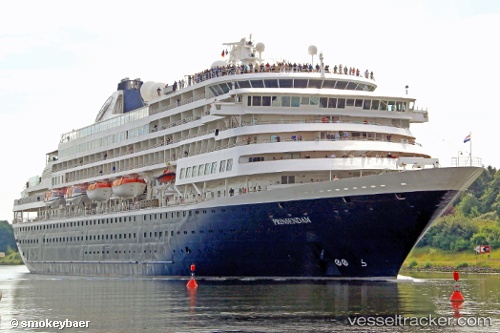 On Oct 8, 2021, the 'Amera' requested the medical evacuation of a passenger from the passenger ship 85 nautical miles southwest of Vigo. The SAR helicopter Helimer I hoisted the patient. He was transferred to the Vigo Peinador airport, where an ambulancetook over. The oepration was coordinated by the CCS Finisterre.

Amera in Emder yard due to COVID-19

The Emder Werft und Dock GmbH has won overhaul contracts for the two Phoenix Reisen ships 'Albatros' and 'Amera' which were scheduled to arrive at Emden in week 15/2020. Experience in the passenger segment was gained through several overhaul contracts for internationally operating ferries including those of P&O Ferries, among others. It has been a strategic goal for some time to enter the cruise business. Emden Dockyard representatives exhibited at Seatrade Cruise Global in 2019. The contracts for the 'Amera' and 'Albatros' were won on short notice as a consequence of the COVID-19 pandemic. Phoenix Reisen decided to have maintenance work carried out while service was suspended.The exact scope was still under planning and will be defined after Easter. The value of the work has not been disclosed. The 'Amera' was to arrive on April 8. The ship berthed at Bremerhaven on April 5, inbound from Brazil with 560 passengers and 423 crew. Along with the passengers, most crew were disembarked. The 'Albatros' reached Bremerhaven in the morning of April 7, carrying some 370 passengers at the end of a three-week voyage from Lembar. The ship was due in Emden on April 9. Emden Dockyard has a safety/security protocol in place for the two vessels.

The 'Amera' berthed at the Columbus Quay in Bremerhaven on April 5, 2020. There were no reported cases of Corona virus infections on board, but one passenger has died during the voyage for unclearissues. If it turns out to be corona virus related issues, all guests and crew members would have to be quarantined for a fortnight. The ship was due to be redurbished in a yard in Emden next. German report with photo: https://www.nwzonline.de/bremerhaven/amera-coronavirus-bremerhaven_a_50,7,3630671068.html