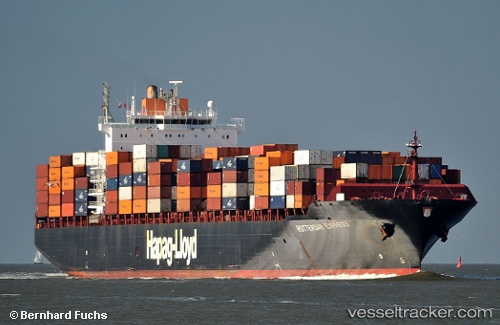 Investigators of the U.S. Coast Guard went on board the 'Rotterdam Express' in the port of Oakland, where it had berthed on Oct 6, 2021, to find out whether it could be linked to last week's large oil spill at Orange County, south of Los Angeles. Satellite images have shown that the German container ship was the vessel that was closest to the oil pipeline from which the spill originated, immediately before the spill occurred. A spokesman for Hapag-Lloyd, which owns the Rotterdam Express, confirmed that the ship was at anchor close to the position where the oil spill occurred, but "quite far from the pipeline". Nils Haupt said: "As it looks at the moment, we do not think we have anything to do with the spill," spokesman Nils Haupt told the newspaper. In fact it cannot be ruled out that the 40-year-old pipeline may have changed position over the years - perhaps as a result of other anchors pulling on it. Investigations by the US Coast Guard showed that the pipeline was pulled more than 30 meters across the seabed, and that the 500,000 liter large oil spill probably originated from a 33 centimeter long breach. Ships, aircraft and clean-up teams on land were still collecting as much of the spilled oil as possible. However, the efforts have not been able to prevent the wildlife in the area from being hit hard. There was also a fishing ban in the waters. The breach, reported on Oct 2, occurred about 5 miles off Huntington Beach in Orange County, spilling the equivalent of an estimated 3,000 barrels of post-production crude. The 'Rotterdam Express' could leave Oakland on Oct 7 as the investigators found nothing suspicious.

The "Rotterdam Express" reported to the Colombian Maritime Authorities the unauthorized presence of unknown persons on board, shortly after leaving Cartagena, bound for Caucedo, late on Jan 27, 2018. The Coast Guard and Navy were sent to the ship which reduced speed. Teams of commandos, immigration and police boarded the ship,and detected 10 persons, clad in black, who had found their way on board during the ship’s stay at Cartagena. In the following cargo check, 185 kilos of pure cocaine were found in containers. The intruders were detained, one of them being a convict. The container ship meanwhile, resumed sailing at a reduced speed. The investigation and search, were still under way. The Colombian authorities believed the illegals on board were connected to the drugs which were found. Video: https://www.youtube.com/watch?v=xv9Z8NMoU3w