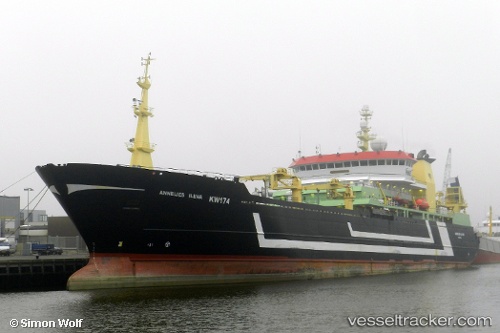 On April 05, 2018, around 4 a.m. the maritime prefecture of the Channel and North Sea was alerted by the CROSS Jobourg after a crew member of the "Annelies Ilena" had suffered an injury. The ship was 37 miles off the Casquets northwest of La Hague. After a medical teleconference between the ship and the Maritime Medical Consultation Center in the Netherlands, a medical evacuation was decided in consultation with the SAMU in Le Havre. A Cayman navy helicopter stationed at Maupertus took on board a team of the Medical Center of the Armed Forces of Querqueville at 4:20 a.m. and took off towards the ship. At 05.20 a.m., the wounded sailor was hoisted and transferred to the hospital of Caen where he was taken care of at 06:30 a.m. French report with photo: https://www.premar-manche.gouv.fr/communiques-presse/vacuation-medicale-bord-chalutier-annelies-ilena-large-des-casquets.html

Skipper of super trawler pleaded not guilty to fishing offences

The skipper of the "Annelies Ilena" pleaded not guilty to fishing offences on Mar 25 at the Donegal Circuit Court. Coastguard officers from the "Lé Róisín" boarded the vessel on Nov 22, 2013 after they saw seagulls following the vessel and retrieving fish from the rear of the trawler. When the vessel was boarded there was evidence that a grading machine was in the production room and fish was being discarded. The trawler was detained off Tory Island and taken to Killybegs. There were no records of any fish discards between October 8th and the date of the boarding. The skipper Gerrit Plug (58), a Dutch national, has pleaded not guilty to five charges. The offences included discarding species of fish which are subject to quota, failing to record discards and having illegal equipment on board. The court was told the trawler had illegal equipment for grading fish and discarding some straight back into to sea which should have been kept. The State’s case is that this was an ongoing, systematic practice on the trawler. The prosecution maintained Mr Plug discarded fish known as horse-mackerel and retaining larger fish to increase the value of the catch. Patricia McLaughlin, for the prosecution, opening the case, told the court all of the offences relate to a practice known as high-grading. That involves discarding fish of legal size to maximise the value of the catch. The trial continues.

Bail of 5,8 millione Euro sought for release of detained trawler

The Irish State has sought bail of €5.8 million to release one of the "Annelies Ilena". The master was being accused of discarding smaller fish in breach of EU rules and failing to make the correct log-book entry. The accusation against him alleged that he high-graded the catch by discarding smaller fish and retaining larger fish to increase the value of the catch. The master of the vessel, Gerrit Plug, appeared at Donegal District Court accused of breaching EU fishing regulations. The Naval Service ship "LE Roisín" had detained the vessel off Tory Island and escorted it into Killybegs, Co Donegal, on Nov 22. On Nov 25 representatives of the ship’s owners claimed the likely evidence, some horse mackerel, was worth only €20 and the State was seeking the factory trawler’s entire catch of €5.8 million as a bond. State Solicitor for Donegal Ciarán Liddy held that Judge Kevin Kilrane had no discretion to reduce the bond. However, defence solicitor Diarmuid Barry argued that a District Court judge had a discretion to apply a lower bond. He suggested €100,000 would be appropriate. Judge Kilrane fixed bail at €250,000 to be put up when he sits at Carrick-on-Shannon Court on Nov 26 and ordered that the vessel be not released until this morning. Earlier, he noted that the €5.8 million bond seemed disproportionate. If he didn’t have discretion to impose lower bail the case would have to go to a higher court. A book of evidence was served and the trial hearing was fixed for Donegal Circuit Court on Dec 10. Plug, who was facing three charges, he has 14 days to inform the prosecution if he was calling an alibi witness. Diek Parlevliet, director of Parlevliet and Van der Plas, which owns the supertrawler, addressed the court and told Judge Kilrane that the vessel’s detention was costing the company €100,000 a day. He claimed nobody had seen any fish going into the sea and he had never heard of €5 million or €6 million being asked for a bond before. Report with photo: http://www.irishtimes.com/news/crime-and-law/courts/state-seeks-5-8m-surety-to-release-factory-trawler-1.1607093