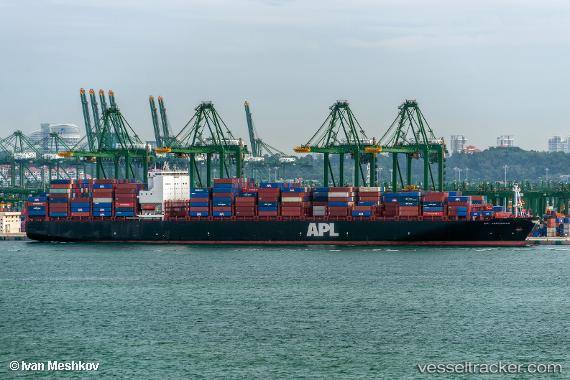 The "APL Vancouver", being escorted by the Singapore flagged tug "Lanpan 34" (IMO: 9739903), arrived at Singapore on Feb 16 at 03.25 a.m. The ship had left Vietnamese waters on Feb 12 after completing the salvage and firefighting operation, followed by surveys of the salvage team and class inspections. General Average was declared with the number of damaged or destroyed containers yet unknown. Ardent Marine was contracted for the salvage on Lloyd’s open form terms. The London-based marine claims firm WE Cox Claims Group expected cargo loss on the "APL Vancouver" to be significant after several days of water being pumped onto the ship and cargo to fight the fire. The ship, which operates on APL’s CIX (China-India Express) service, had around 4,500 containers on board.

After four days of struggle, on Feb 4 at 4 p.m. the fire aboard the "APL Vancouver" was unter control. Currently, Dutch experts were coordinating with the Vietnamese Rescue Department in implementing measures to thoroughly overcome the fire so that the ship can proceed to Singapore. General average (GA) was likely to be declared on the "APL Vancouver", given the potential size of the salvage claim. Eight ships were actually involved in the operation, the "CSB 8005", "HQ 991", "VT 101", "TC Dragon", "Ashico Lam Son", "Tan Cang 65", "BP 36-98-01" and the "SAR 27-01" of the Vietnam Maritime Search and Rescue Center.