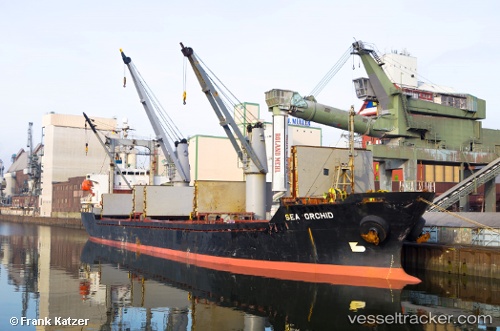 On Jan 19 the "Sea Orchid" was cleared to sail again in Kiel and resumed its voyage to Algeria. The police had found serious defiencies during a port state control. There were gaps in the oil record book gaps regarding the whereabouts of three cubic meters of oil sludge. In addition, an unusual amount of garbage was found on board, for which the crew failed to have a disposal concept. The wastewater treatment plant of the ship lacked necessary sewage purification tablets for the disinfection. When the officers checked the sewage plant, there was another surprise. A water sample showed a black liquid with particles, and the officers ordered the immediate closure of the line. The waste water from the ship had now to be stored in a tank under supervision in a tank on board, and the waste had to be disposed of properly in Kiel. The abundance of non-compliance also has legal consequences. Several criminal proceedings were initiated against the crew. The captain had to pay a security deposit of 3000 Euros. The "Sea Orchid" had a lot of defiencies in recent years - most recently in October in Canada. German report with photo: http://www.kn-online.de/Lokales/Kiel/Frachter-mit-Maengeln-Seelenverkaeufer-im-Nordhafen-festgesetzt

Ship arrested in Kiel due to several defiencies and environmental violations

On Jan 15 the "Sea Orchid" berthed at the Voith Quay in the North Port of Kiel on its way to Algier with a cargo of wheat and was detained by the relevant authorities after an inspection which showed defiencies regarding the ship's safety and environmental violations. The crew of the "Sea Orchid" had pumped feces and other sewage untreated over board in Kiel. Regarding three cubic meters of oil sludge, the crew was unable to provide a proof of disposal. The captain had to pay a safety deposit of 3000 Euro. The "Sea Orchid" had left Lübeck on Jan 7. The captain of the freighter then chose go round Skagen despite the storm warnings. On Jan 11 a Philippino crew member went over board 20 nautical miles west of Hanstholm. Two Danish military helicopters launced a search along with other ships after the coming of the Philippines man. The crew of a helicopter recovered the man who died before the transfer to the University Hospital of Aalborg. After approval by the Danish authorities and in light of new storns, the captain turned around and reeturned to the Baltic. In Kiel a replacement for the deceased seafarer should get on board. Currently, the crew was going to resolve the safety deficiencies, which may still take several days. The abundance of non-compliances also has legal consequences. Several criminal offenses and procedures have been launched against the crew. Already in the past several defiencies have been found aboard the "Sea Orchid" during port state controls. Canadian authorities stopped the the vessel on Oct 22, 2014, after the authorities found 22 deficiencies that needed to be rectified by the crew before heading to Europe. German reports with photos: http://www.ndr.de/nachrichten/schleswig-holstein/Wasserschutzpolizei-legt-Frachter-an-die-Kette,frachtschiff108.html http://www.kn-online.de/Lokales/Kiel/Katastrophale-Zustaende-auf-Frachter-in-Kiel-entdeckt http://www.rtntvnews.de/news/10871/Maengel--Wasserschutzpolizei-legt-Sea-Orchid-an-die-Kette/ http://www.nok-photography.de/sea-orchid/

Crew member died after falling into the sea

A Philippino crew member of the "Sea Orchid" which was enroute from Lübeck to Algeria died in the sea 20 miles north of Hanstholm after he fell over board in the morning of Jan 11, 2015, off Hanstholm. Two rescue helicopters were dispatched to the scene and a ship nearby was also alerted. They managed to spot the lifeless sailor in the water. He was recovered and flown to Aalborg Hospital, butwas pronounced dead upon arrival. Two men from the Central and West Jutland Police were taken to the wood chip carrier to investigate the accident and interrogate the crew aboard the ship about what happened.