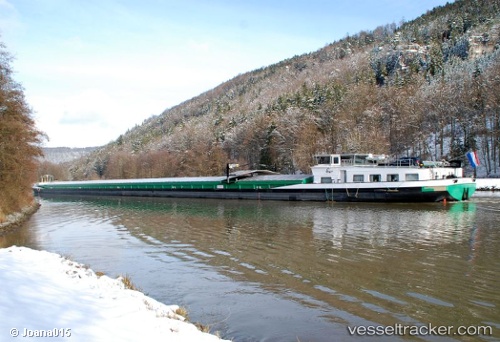 Earlier than expected, the Dutch barge "Densimo", 2421 ts (EU-No.: 02327312), and the "Arese", 4406 ts (EU-No.: 02331690), which had blocked the Danube were refloated in the afternoon of Nov 24. First it was considered that they would be lightered on Nov 25 and not be pulled off before the afternoon, but both are off now and were in Vilshofen for investigations. A dredger was on scene to remove any obstructions in the fairway before the ban for shipping could be lifted. between forty and fifty ships were waiting to pass through.

On the Danube near Flintsbach at river km 2263,3 on Nov 23, 2013, the Dutch flagged, self propelled barge "Arese", 4406 ts (EU-No.: 02331690), loaded with 1000 tons soybeans meal, which tried to refloat the grounded barge "Densimo" which got stuck on Nov 22 at 7.15 p.m., also ran aground. First the "Densimo" was refloated, but the "Arese" got gravel in its bow thruster and got stuck itself at the right river shore. When darkness fell, the works were interrupted. Another ship which was berthed at Vilshofen was to resume the salvage on Nov 24. The river remained closed for ship traffic between Deggendorf and Vilshofen. In spite of that three ships passed the grounded ships, and during the passage the "Densimo" was pushed even higher aground. It was expected that both ships would have to be lightered now.