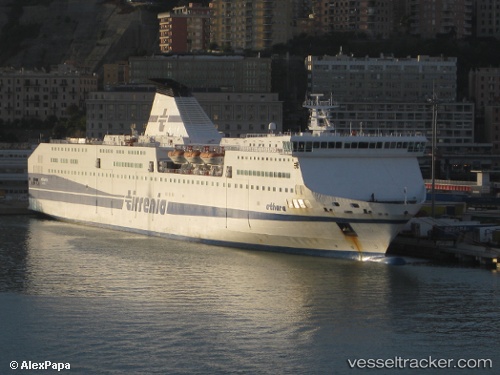 Fire on board days after drill

On Dec 16, 2020, at around 11 p.m. a fire broke out in the car deck of the 'Athara' which was enroute from Genoa, where she had sailed at 8.30 p.m. to Porto Torres with 172 passnegers and 43 crew members on board 40 miles from the port of departure. Due to the smoke that spread, there were scenes of fear and tension on board. In the cabins near the hold, the smoke was very dense and acrid, some passengers were very frightened. The fire, which damaged 20 cars and trailers in the affected deck, was quickly contained by the fire preventions systems and the crew. The captain immediately alerted the passengers, including many Sardinians who were returning to the island for the Christmas holidays, gathered them near the bar. The passengers were refreshed with sandwiches, soft drinks, hot drinks. The crew also provided them with everything we needed. The ferry reversed to Genoa, from where, as a precaution, the Port Authority of Genoa ordered the patrol boat 'CP 2110' to assist. The 'Athara' safely berthed on Dec 17 at 2 a.m., being awaited by dozens of firefighters, who quenched remaining hot sports and made the ship safe. Inspectors of the Genoa Coast Guard and RINA technicians went on board for investigations and surveys, coordinated by the Genoa Public Prosecutors's office. According to first reconstructions, the fire originated from a reefer truck and spread to nearby vehicles and trailers. The shipping company organized the transfer of passengers onto another ferry in the run of the day. The 'Athara' remained detained until the completion of investigations and a class inspection. Several trucks and cars have been taken out of the car deck, showing obvious signs of soot. No injuries were reported, and no one needed medical assistance. Only on Dec 11 a firefighting exercise had been held including the ferry in the port of Porto Torres, including a Mayday launched by the captain which required urgent intervention due to a fire in the engine room with a serious injury. Rescue operations were coordinated by the Port Authority of Porto Torreswith a patrol boat, the fire brigade, carabinieri, financial police and police. During the drill, a seafarer, with burns in various parts of his body, was taken over by the 118 medical staff who, after having given the first treatments, proceeded to transfer him by ambulance to the Santissima Annunziata hospital in Sassari. The purpose of the exercise was to verify the response times of the rescue vehicles and compliance with the procedures provided. All the technical-nautical services of the port of Porto Torres and the Sardinian Anti-Pollution Society participated in the exercise. Reports with photo and video: https://www.prealpina.it/pages/fiamme-in-stiva-traghetto-rientrato-in-porto-237152.html?from=interni-esteri https://www.unionesarda.it/articolo/news-sardegna/sassari-provincia/2020/12/17/incendio-nella-stiva-della-athara-fumo-e-fuliggine-momenti-di-pau-136-1094763.html

The "Cruise Bonaria" of Grimaldi and the "Athara" of Tirrenia were in allision on Jan 24, 2019, at noon. The "Athara" was about to depart from the Isola Bianca port in Olbia after she was caught by a strong wind gust and pushed against the berthed "Cruise Bonaria". Tugs could not avoid the accident, and the "Cruise Bonaria" was hit at starboard side and suffered damage to the outboard gangway and two large windows, while there were no injuries among the passengers. The "Athara" suffered damage to the dashboard wing at port side. She was expected to leave bound to Genova at 9.30 p.m. after emergency repairs. The "Cruise Bonaria" was able to sail as scheduled bound for Livorno where she was to be further inspected by the local authorities. Italian reports with videos: http://www.lanuovasardegna.it/olbia/cronaca/2019/01/24/news/olbia-il-vento-sbatte-le-navi-una-contro-l-altra-collisione-fra-traghetti-in-porto-1.17686337?refresh_ce https://www.unionesarda.it/articolo/news-sardegna/gallura/2019/01/24/olbia-collisione-fra-navi-al-porto-colpa-del-vento-136-826523.html

Palumbo Group has embarked on a project to renovate eight ro-pax ferries for Italian operator Tirrenia at its shipyards in Messina and Naples, Italy. The project started in 2017 when Palumbo Group carried out cosmetic works and refitted public spaces onboard Sharden, Nuraghes and Moby Niki, and will continue with similar refurbishments on Athara, Janas and Bithia this year. In 2019, sister ships Vincenzo Florio and Raffaele Rubattino will be renovated