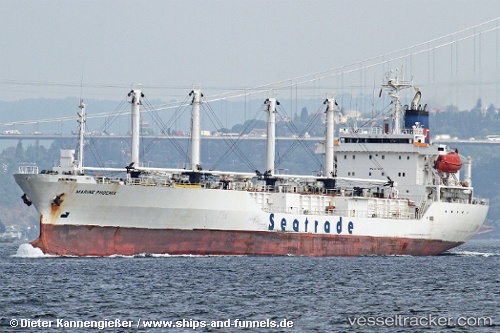 Phoenix back on the track

The "Marine Phoenix" that was detained while sick crewmen were taken to the hospital, is now back on schedule and made its trip to the original destination in New Orleans East on Sep 18. A river pilot boarded the vessel at 10 a.m. at its anchorage near Belle Chasse. In the evening of Sep 17 health officials in protective gear, took sick crewmen off of the ship to transport them to West Jefferson Medical Center. The ship had transmitted by radio the symptoms of those who were sick. The Centers for Disease Control got involved because the ship had made a stop in West Africa. There was also a sick crewman taken off the ship in the Bahamas who later died. Blood tests confirmed that the illness was malaria, caused by mosquitoes that spread the parasite in the blood. On Sep 18,just after noon, the refrigeration ship entered the Industrial Canal. Two tugs assisted it through the locks. There was no word on how many crewmen remained on the vessel. The ship continued to its destination, New Orleans Cold Storage on Jourdan Road in Almonaster, to pick up its cargo to export. The "Marine Phoenix" was scheduled to spend stay at New Orleans Cold Storage loading its cargo, until Sep 25. Report with video: http://www.wwltv.com/story/news/health/2014/09/18/ship-malaria-new-orleans/15850739/

One person on board the "Marine Phoenix" was critically ill in a Jefferson Parish hospital after being diagnosed with malaria. Several other sailors on board were also to be treated after showing signs of the disease. On Sep 17, the Centers for Disease Control stressed that the crew members on the freighter inbound to New Orleans were suffering from malaria and show no traces of Ebola. Another crew member aboard the freighter died from malaria after getting off the ship in the Bahamas earlier in the week. Those being treated were taken to West Jefferson Medical Center in Marrero. First responders who took those three people to the hospital wore protective gear as a precaution, though health officials noted early on that it was extremely unlikely that Ebola was to blame for the sickness on the "Marine Phoenix". The ship was anchored in the Mississippi River near Belle Chasse. It was expected to continue on to New Orleans on Sep 18 around 10 a.m. The Coast Guard isolated the area. None of the employees allowed to get to the vessel or the people being transported. Report with video: http://www.wdsu.com/news/local-news/new-orleans/one-dead-three-hospitalized-with-malaria-from-ship-inbound-from-africa/28119476#ixzz3DgE7yqbW

The "Marine Phoenix" on is arrival in New Orleans on Sep 17, 2014, around 6 p.m. had one critically ill crew member on board, who was taken to hospital, together with three other crew members and a pilot. The vessel had come from the Democratic Republic of Congo, which immediately generated possible Ebola case speculations. Officials said it was malaria, not Ebola. Three other crew were suffering from a light form of illness, and the pilot was hospitalized for a check, just to be safe. The vessel had informed US authorities about ill persons on board well in advance.