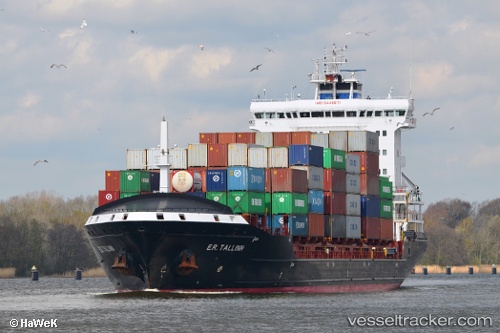 The "Beatriz B" has been drifting for six hours 1,5 miles off the coast controlled by a tug between the Santa Cruz de La Palma pier and the area of ​​Los Cancajos (Breña Baja) on March 18, 2018. The fault occurred in one of the cooling tubes of the main engine in the early morning. The sea initially in the was quiet, although later a little the wind got stronger and caught the ship which was timewise hooked to the tug to control the movement. After engine repairs she managed to enter the port of Santa Cruz de La Palma escorted by the tug at 3 p.m. Spanish report with photo: https://www.eldiario.es/lapalmaahora/sociedad/averia-Puerto-capital-portacontenedores-Beatriz_0_751374940.html

In the morning of Jan 25, 2017, the water police stopped the "E.R. Tallinn“ in the locks of the Kiel-Canal in Kiel. When leaving the port of Hamburg, a measuring station of the Federal Maritime and Hydrography Agency had reported a significant overshooting of the limits ​​for sulfur in the exhaust gases of the freighter. The Federal Office alerted the water police Kiel while the ship was traveling through the Kiel Canal to the Baltic Sea. There is no exhaust gas purification system on board the ship. For this reason, the crew could only use marine diesel oil with a sulfur content of 0.1 per cent. The fuel now used by the crew was now to be investigated. The policemen therefore inspected oil samples and checked the data and diaries of the engine. The prosecutor in Kiel ordered a security fine of € 5,000. A criminal complaint against the responsible members of the crew was made in the lock. After the end of the inspection and the deposit of the safety performance the "E.R. Tallinn" was allowed to continue the voyage to Copenhagen.

The "E.R. Tallinn", while enroute from Rotterdam, where she had sailed on May 11, 2015, to Gdynia, ETA May 13, allided with the middle wall of the southern lock of the Kiel Canal in Brunsbüttel when entering on May 12 around 20 minutes past midnight. The ship suffered some damage at the port side foreship well above the waterline. It continued its eastbound voyage around 2 a.m. and berthed at the North Jetty in the Scheer Port of Kiel at 10 a.m. for repairs on site which were carried out by workers of a local yard. The ship continued the voyage around 11 p.m. and was expected in Gdynia on May 13 around 8 p.m. German report and photos: http://forum-schiff.de/phpBB3/viewtopic.php?f=2&t=23&p=114896#p114896 http://www.forum-schiff.de/phpBB3/viewtopic.php?f=9&t=1377#p114895