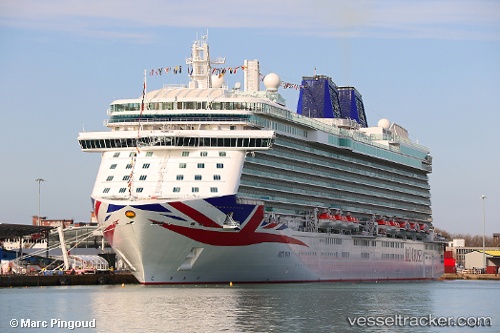 A passenger aboard the 'Britannia', en route from Barcelona to Cadiz, fell ill and needed to be medevaced in the night of June 22, 2022. The MRCC in Cartagena of Salvamento Marítimo deployed the SAR boat 'Salvamar Draco' to carry out the medical evacuation of the patient. He was then transferred to Cartagena for medical care.

On June 30, 2021, a cruise ship passenger has been convicted of kicking a passenger 'like a penalty' and punching another man when a violent brawl erupted during a late night buffet on the 'Britannia' on July 26, 2019. Paul Evans, who previously worked as a stockbroker, assaulted statistician Justin Gardner, who was there with his wife and two daughters, before kicking project manager Andrew Irving when he attempted to intervene. The fight on board P&O's Royal Britannia ship had been sparked when the Gardners asked the 45 year old Evans and his YouTuber girlfriend Tabatha Young to stop swearing as they dined in the Horizon buffet. Mr Gardner and his nurse wife Sarah had attended a family disco with 21 year old Alice and 16 year old Amelia when they retired to the buffet but became upset by the language from a neighbouring table. Mrs Gardner told the jury she tried to film Evans on a phone for 'evidence' as tempers flared and he grappled with Alice. The court heard he then turned his 'rage' on 48 year old Mrs Gardner by 'rugby tackling' her to the ground, snatching the mobile phone and hurling it out to sea, although he said he had simply taken the phone as he feared she would use it as a weapon. Mr Irving, who was there with his wife and 10 year old granddaughter, said he couldn't stand by so went to help but was then knocked to the ground and kicked by Evans 'like he was taking a penalty'. After grabbing the mobile phone from Mrs Gardner, Evans went up on deck and was captured on CCTV throwing it overboard. The court heard he then returned to the dining room and the brawl continued before he and Young were eventually restrained by security. They were taken into custody by police once the ship docked at Southampton. Evans denied one count of robbery and three counts of assault causing actual bodily harm following the extraordinary scenes during the early hours of July 26 2019, claiming he had simply been trying to protect his girlfriend. Evans, of Clayhall, Essex, was cleared of attacking Alice and robbing Mrs Gardner of the phone, but convicted of causing ABH to Mr Gardner and Mr Irving, after the jury deliberated for more than six hours.