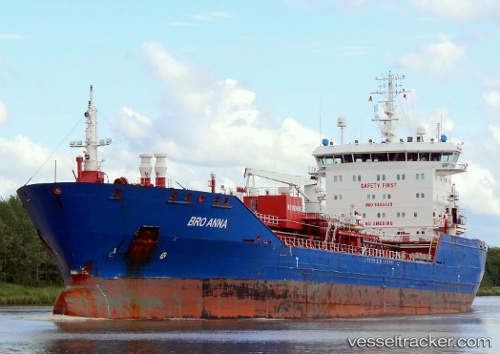 The Transportation Safety Board of Canada (TSB) dispatched investigators to Beauharnois, Montérégie, on Aug 30, 2017, after the "Bro Anna" carrying a cargo of gasoline, suffered an engine blackout and ran aground in the early evening of Aug 29, 2017. The tanker grounded on the south side of the Beauharnois Canal at 6.10 p.m. It was refloated in the morning of Aug 30 and was moved upstream of Lock 4. Two investigators from the federal agency were deployed to conduct an investigation, talk with the crew, the captain and evaluate the engine room to check what happened. French reports with photos: http://beta.radio-canada.ca/nouvelle/1053131/enquete-navire-echoue-beauharnois http://www.cybersoleil.com/actualites/2017/8/31/le-navire-echoue-a-beauharnois-a-eu-panne-complete.html

On its eastboudn way to Kaliningrad the crew of the "Bro Anna" on June 2, 2012, at 9 p.m. remarked, that the embankment of the Kiel Canal had slipped on a lenght of 10-15 metres at canal km 60 near Westerrönfeld. The ship raised alarm at the police which immediately blocked the way along the canal, before workers of the canal authority started their investigations. Probably the embankment was undermined by the wake of passing ships.

The "Bro Anna" encountered machine failure in the afternoon of Sep 24, 2010, short after having departed from Rotterdam towards Port Jerome near the Maas lock. The tugs "Texelbank" and "Smit Zweden" were called for assistance and towed the ship to the Poorters harbour where the crew was able to restart the main engine. Then the vessel proceeded slowly towards Hoek van Holland.