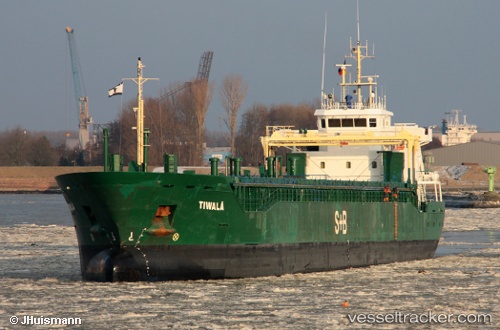 The Turkish ferry "Salayar" (MMSI: 271002606) was in collision with the "Tiwala", which was enroute from Ceuta to Varna, around midnight on May 5, 2017, in the Marmara Sea off Marmara island. The ferry was en route from Bandirma to Tekirdag with 25 vehicles on board. It’s portside forecastle was damaged. No injures were reported. The ferry safely arrived at Tekirdag on May 6 at 5 a.m.

On Jan 21, 2012, at 11.40 p.m. the Dutch roro ferry "Plyca", while passing the inland port of Brunsbüttel eastbound from Antwerp to Rauma, had so much speed off the TOTAL bunker station that strong suction and swell caused movements of the moored "Tiwala", which was enroute Muuga-Bayonne, so that one of the ship's bow lines broke. The movement caused considerable damage to the gangway and a shelter with hose reels. The Water Police Station Brunsbüttel launched an investigation. The master of the "Plyca" had to pay a guarantee deposit of 175 Euro.