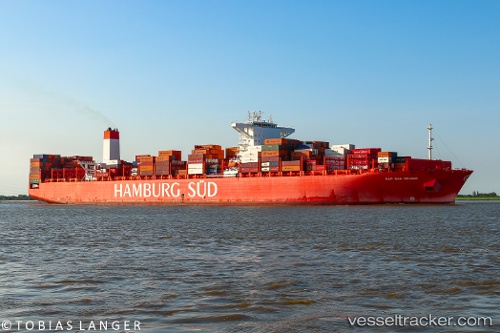 The Peruvian Drug Enforcement agency officers searched the "Cap San Sounio" in the morning of June 29, 2018, at the Callao container terminal, upon its arrival from Buenaventura, Colombia. They found and seized a 24-kilo shipment of cocaine, hidden in a compartment under the cargo deck in row 04 bay 64 aft area. The cocaine was believed to have been destined for Europe. The place where the cocaine was found implied the possibility of a crew complicity. It wasn’t hidden, as in the majority of container ships drug busts, in a container. At least one crew member was detained and interrogated as a suspect. On June 30 the ship was still docked at the DP World Callao Container Terminal.

Hamburg Sud is to take delivery of the ninth of 12 high reefer 9,814 TEU, the Cap San Sounio, built by Hyundai Heavy Industries (HHI) assigned to the multicarrier Far East-ECSA (SEAS 2/ASAX 2/ASAS 2/NGX 2). The vessel is the third of four chartered units with nine of the others owned by Greek company Enesel to join the service jointly operated by Maersk, CMA CGM, Hamburg Sud, CNNI, CSCL and Hanjin with Hapag-Lloyd and CSAV co-loading. The Cap San series of same size vessels are the biggest ships bought by Hamburg Sud with 2,100 reefer plugs allowing sufficient space of 110,000 cubic metres of refrigerated cargo, noted Alphaliner. The German carrier financed the remaining four vessels on order to Greek Company Enesel SA (NS Lemos) through a long-term charter with the German carrier are due second half 2014. The first six of the HS-owned units were ordered in March 2011.