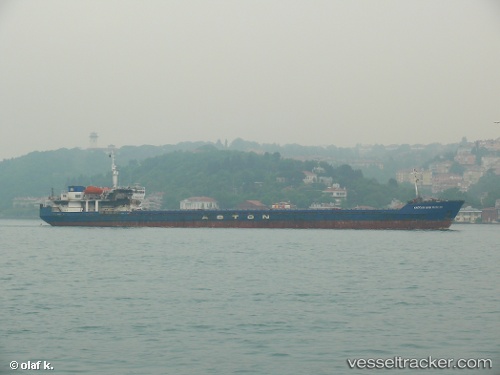 The tank m/v 'VF Tanker-22' (IMO: 9645114), enroute from Burgas to Yeysk with an ETA as of Jan 17, 2021, and the 'Captain Ivan Vikulov', coming from Rostov-on-Don, were in collision in the Kerch Strait off the port of Kavkaz in the evening of Jan 15. The hulls of both vessels suffered minor damage. The reasons of the incident were being investigated.

Derelict freighter is drifting, on fire and stuck in ice, in the middle of Azov sea

Derelict Russian freighter Captain Ivan Vikulov is drifting, on fire and stuck in ice, in the middle of Azov sea, and no one seems to care. Media said “the fire was extinguished”, but that’s an assumption, not the fact. Icebreaker Kapitan Moshkin with evacuated last 4 crew (10 were evacuated by helicopter earlier that day), left the vessel at around 1600 Moscow time Feb 6, there no one on board, and nobody was fighting fire. The fate of the vessel is unknown, media said that the salvage is subject to payment. Shipowner didn’t sign salvage contract yet, and until then, nobody will do anything about derelict vessel on fire. This is really strange, to say the least, as the distressed derelict vessel drifts in Azov sea, enclosed area with heavy shipping, divided between Ukraine and Russia. Russian authorities differ in statements – some say, icebreaker will return to the vessel, others say, it’s a question of payment. Meanwhile, unusually cold winter in Azov sea region resulted in heavy ice, at least two freighters, Mystery K and Volgo-Balt 239, are stuck in ice, waiting for icebreakers. Read full story at http://www.odin.tc/news/read.asp?articleID=550