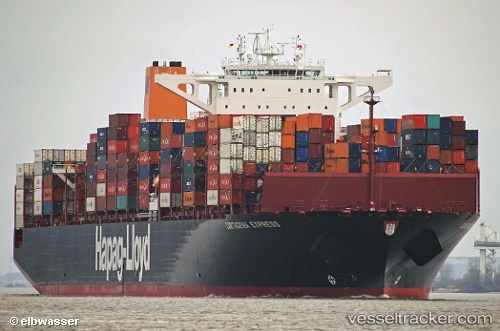 German shipping company Hapag-Lloyd named its second new 10,500 TEU containership Cartagena Express at the Hyundai Samho Heavy Industries shipyard in Samho, South Korea, on January 23, 2017. Scheduled to be deployed in the company’s SW service, Cartagena Express is the third ship of the Post-Panamax series to be delivered to Hapag-Lloyd, after the Valparaíso Express, which gave its name to the new class, and the Callao Express. All three newbuildings will be deployed in the SW service, which offers weekly connections between North Europe, the Caribbean and West Coast South America. “With the Cartagena Express, yet another state-of-the-art ship of our 10,500 TEU fleet is setting sail. In terms of size, design and reefer capacity, it is ideally suited for the traffic between Europe and South America West Coast,” Anthony J. Firmin, Chief Operating Officer of Hapag-Lloyd, said. In the SW service, the 333 meters long and 48 meters wide Cartagena Express will call at the following ports: Rotterdam (the Netherlands), London (UK), Hamburg (Germany), Antwerp (Belgium), Le Havre (France), Caucedo (Dominican Republic), Cartagena (Colombia), Manzanillo (Panama), Buenaventura (Colombia), Callao (Peru), Puerto Angamos, Valparaíso (Chile), Callao, Buenaventura, Manzanillo (Panama), Cartagena, Caucedo and Rotterdam again. Classified by DNV GL, all five vessels will sail under the German flag. The boxships in this class have a total capacity of 10,593 TEU, including 2,100 plugs for temperature-controlled reefer containers. http://worldmaritimenews.com/archives/211049/hapag-lloyd-names-second-10500-teu-ship/