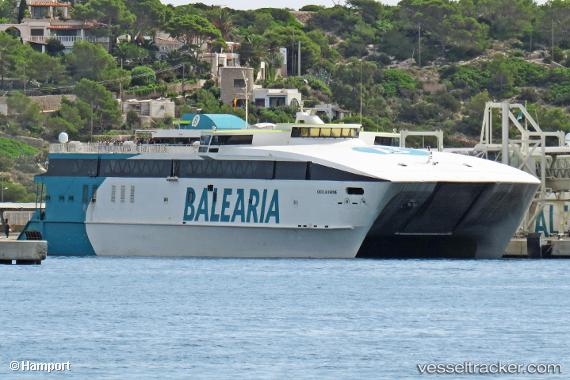 Baleària canceled the sailings of the "Cecilia Payne" on the Ibiza-Palma route on March 16, 2019, due to a technical problem with doors not operning. The ferry company has offered passengers to relocate them on the 'Hypatia of Alexandria', in addition to other alternatives such as changing the date of the ticket or reimbursement of the amount after the sailings were cancelled in the afternoon with the ship remaining in Ibiza.

On Feb 20, 2019, at 9.50 a.m. the "Cecilia Payne" caused the fishing vessel "Virginia" to capsize when both ships left Alcúdia at the same time. The accident happened about 1,5 miles off the port. The fishing boat partially sank, the skipper Paco Souto Flaquer was rescued from the keel by the 'llaüt' that was nearby. Both ships had been sailing on parallel courses when the swell of the Ciutadella-bound ferry filled the fishing boat with water. The "Salvamar Saiph" of the Salvamento Marítimo station in Alccúdia assisted with the rescue and took the fisherman off the keel. The f/v "Lince II" was first on site to support him. AT 2 p.m. the wreck of the "Virginia", a so-called llaüt of 7,50 meters length and an age of about 35 years, was secured with air balloons and towed into port by the fishing vessels "Nou Vista Alegre", "Aguileño" and "Es Batlets". On a water depth of four meters a diver of Alcúdiamar worked several hours to prepare the righting of the boat. The ferry had continued its way as the captain had not remarked the accident. The operator Baleària started an investigation jointly with the maritime captaincy. Spanish reports with photos and video: https://www.diariodeibiza.es/pitiuses-balears/2019/02/21/olas-generadas-ferri-hunden-pesquero/1048951.html https://www.diariodemallorca.es/part-forana/2019/02/20/ferry-ciutadella-hunde-pesquero-accidente/1393656.html

After the arrival of the "Cecilia Payne' in Palma de Mallorca in the evening of Aug 13, 2018, three passengers had to be treated medically for a heat stroke. The reason was a faulty air conditioning on board the ferry which came from Ibiza.After the malfunction, snacks and drinks were distributed to the passengers as the temperatures inside the ship could not be cooled down. Operator Baleària apologized to the over 700 passengers and promised to reimburse the ticket costs. Several passengers spoke on arrival in Palma of tumultuous scenes on board. The faulty air-conditioning system was repaired all night long so that the ship left the port of Palma on schedule at 8:00 a.m. on Aug 14 with working air conditioning.