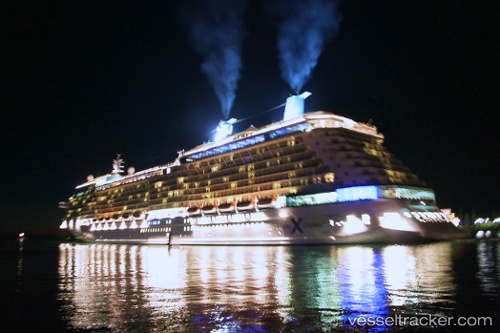 The US Coast Guard medevaced a 29-year-old man from the 'Celebrity Eclipse' near Dall Island, approximately 65 nautical miles southwest of Ketchikan, Alaska, in the evening of Aug 30. Watchstanders from the Coast Guard Sector Juneau command center received a report at 4:05 p.m. from the staff captain of the cruise ship stating that a crew member was potentially experiencing appendicitis. Watchstanders dispatched the Air Station Sitka where an MH-60 Jayhawk helicopter took off and arrived on scene at 7:18 p.m. It hoisted the patient and transported him to awaiting EMS in Sitka. “Launching offshore and at night can be complex and challenging,” said Lt. j.g. Trevor Layman, Sector Juneau command duty officer. “Cases like this demonstrate how the hard work and consistent training from our members allow us to safely carry out missions and successfully help those in need.”

After a major delay, the 'Celebrity Eclipse', that was stuck in Vancouver due to an ongoing strike and was supposed to leave Canada Place on Aug 28 at 5 p.m., finally left port in the afternoon of Aug 29 en route to Hubard Glacier. The ship was able to leave after a fuel barge was detached. The Canadian Merchant Services Guild has been on strike since Aug 25. While Seaspan doesn’t directly assist cruise ships, it does tow barges like the one that was attached to the vessel. Report with photos: https://vancouver.citynews.ca/2022/08/29/vancouver-cruise-ship-seaspan-strike/

Cruise ship stuck in Vancouver due to tugboat strike

Passengers on the 'Celebrity Eclipse' were stranded in Vancouver by a tugboat strike on Aug 28, 2022. The ship had been due to depart in the afternoon, but was unable to leave the Port of Vancouver without the tugs. The staff was working diligently with local authorities to resolve the situation so the ship can sail. An onboard announcement this morning from the captain said the vessel was tied to a barge whose crew are on strike, with the barge crew refusing to move it, while other tugboat companies still operating in the port would not move the barge either because they don’t own it. The Canadian Merchant Service Guild began job action on all 30 Seaspan tugs in the province on Aug 26 after it said contract negotiations reached an impasse. As of Aug 29, the ship remained stationary in port.