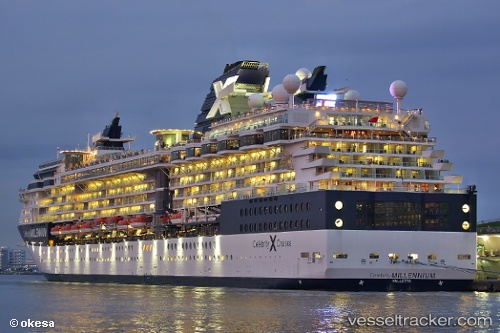 Celebrity Millennium’s transformation — part of the Celebrity Revolution — is just the beginning of Celebrity Cruises’ biggest fleet-wide modernization ever, with more than $500 million in renovations set to take place. Celebrity Millennium’s bow-to-stern transformation began on January 2, 2019, at the Sembawang Shipyard in Singapore. There, it spent a total of 35 days in the skilled hands of thousands of engineers, architects, artisans, designers, contractors, shipyard employees, and the newbuild and Celebrity teams.

On Dec 6, 2018, the Ukrainian officer Anton Ilichev of the "Celebrity Millenium" was found dead in his caabin. The ship was underway to Singapore. It was the last working day of the suite manager on board before starting a scheduled vacation. He was thought to have committed suicide. He had worked for the cruise line on several contracts in the past.

Blackout in Strait of Georgia

The "Celebrity Millennium", being under the conduct of a pilot, was disabled due to a blackout while transiting the Strait of Georgia, British Columbia, in position 49 19.991 N, 123 52.282 W, on Sep 14, 2018, at 8 p.m. The crew made repairs and the vessel continued its voyage from Vancouver to Sitka.