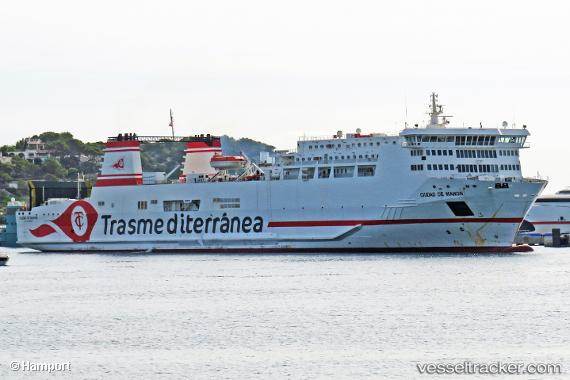 On Feb 18, 2020, a sick passenger of Romanian nationality was medevaced from the 'Ciudad de Mahón' about 11 miles North of the island of Dragonera. The SAR-helicopter Helimer 215 was mobilized fby the CCS Palma of Salvamento Marítimo. The 69 year old patient was safely hoisted and transported to the Son Espases hospital in Palma. Video: https://twitter.com/i/status/1229837016373788672

On Feb 6, 2017, the "Zurbarán" was hit by a freak wave in the Balearic Sea while enroute from Mallorca to Valencia. Already the transit from Menorca to Mallorca was troubled, and the ship left port already with a delay. Around 2 a.m. the ship got into severe storm, and four windows in the front area on deck 2 burst. Water gushed into the room and flowed into the hall and restaurant on the same deck, while the passengers fled from the flooding. All affected rooms were closed while the crew covered the large windows with tarpaulins. The patch did not stop the entire room from being flooded. The crew propped everything up with tables, and the shattered glass added to the shattered plates by the continuous swaying of the ship. 100 passengers who were seated in the affected saloon were accomodated in cabins. The captain changed the course to prevent the waves from further hitting the bow. The ship reached Valencia with a considerable delay at 12.30 p.m., 4,5 hours late. Spanish reports with photos: https://menorca.info/menorca/sucesos/2017/594906/ola-revienta-parte-cristalera-del-barco-tras-hacia-ruta-mao-palma-valencia.html http://www.diariodemallorca.es/sucesos/2017/02/07/travesia-infernal-zurbaran/1187494.html

Coming from Barcelona, the "Zurbaran" reached the port of Palma de Mallorca in the morning of Nov 30, 2014, with a delay of 20 hours due to a technical failure. The ship had sailed from Barcelona around 11 p.m. on Nov 28 with 150 passengers but returned to port. It sailed again on Nov 29 at 7 p.m. The passengers got meals on board in the meantime. The ferry was to sail back as scheduled on Nov 30 at 11 p.m.