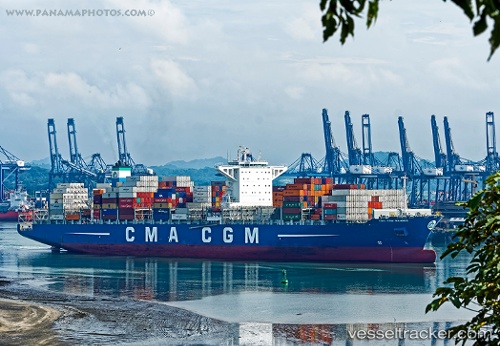 The "CMA CGM Ganges" ran aground on Sep 25, 2017, at 02.30 a.m. shortly after leaving Guayaquil, probably straying off the fairway due to the low tide. The vessel got off the mud bank with the rising tide again and was allowed to resume the voyage to the original destination, Buenaventura at full speed, arriving there on Sep 27 at 2 p.m.

CMA CGM’s Post Panamax vessel offers more direct route for Ecuadorean exports to China - Ecuadorean banana exporters have a new service providing faster and more direct access to the Chinese market. According to a report in Sopisco News, CMA CGM’s new ship, GANGES, capable of carrying 9,962 TEUs, arrived in Liberator Bolivar Port of Guayaquil on 31 August. With a maximum draft of 14.5 metres and a length of 300m, the Post Panamax type ship is the largest ever anchored in this terminal. However, explained Javier Moreira, CEO of the CMA CGM shipping company, it will only carry up to 4,000 containers since the depth of the port of Guayaquil, 9.75m, does not allow for more weight.The ship arrived in Guayaquil from China carrying electronics, toys, raw materials, and general consumer goods. It was set to leave Ecuador bound for Mexico, then South Korea and China, with 2,800 TEU, including a shipment of Ecuadorean bananas. It can accommodate 1,500 refrigerated containers. Because of the extensive route, it is estimated that the ship, which has a cost of US$95m, will come to port every two months.