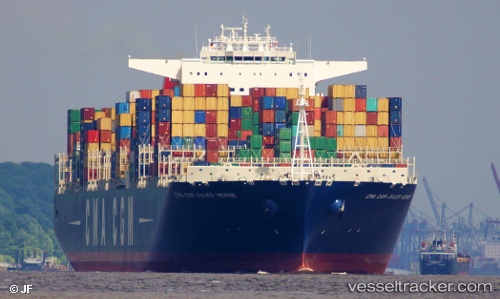 Third-largest shipping line CMA CGM and French wooden toys manufacturer VILAC have created a co-branding partnership and have together launched a wooden ‘My First Containership’ toy for children over the age of 3. This beautiful item was created according to large CMA CGM container ships. It was designed by CMA CGM, produced and sold by VILAC. This wooden toy will be widely distributed in more than 12 countries including France, the USA, Italy, the UK and Indonesia. It is available to order worldwide through VILAC distributors’ shops and on their websites. My first container ship is an educational toy to teach children how to stack shapes, and the first container transportation themed wooden toy. It was designed according to CMA CGM large container ships and was produced by VILAC – the French leading wooden toys manufacturer since 1911. This co-branding partnership between VILAC and CMA CGM is a new step in its brand notoriety reinforcement. Fact File: CMA CGM, founded and led by Jacques R. Saadé is a leading worldwide shipping group. Its 470 vessels call more than 400 ports in the world, on all 5 continents. In 2014, they carried 12.2 million TEUs (twenty-foot equivalent units). CMA CGM has grown continuously, and has been constantly innovating to offer its clients new sea, land and logistics solutions. With a presence in 160 countries, through its 655 agencies network, the Group employs 22,000 people worldwide, including 2,400 in its headquarter in Marseilles. https://www.porttechnology.org/news/cma_cgm_launch_first_wooden_containership

The CMA CGM Group and the German Central Command of Maritime Emergencies have conducted an exercise to test the capability to tow ultra-large container vessels. The test was held on June 13 2015, at the Deep Water Road off Heligoland, and the "CMA CGM Jules Verne" was used for the exercise. The test involved different exercises for "CMA CGM Jules Verne" – altering geographical position, taking over a ship in distress role during emergency towing and allowing representatives of the Central Command of Maritime Emergencies to board. The operation forces had to board the container ship via helicopter and evaluate the situation with the ship's master. The exercise also aimed to train the communication between the on-scene-coordinator, the boarding team, the emergency towing vessels and the "CMA CMG Jules Verne". The teams of the Central Command of Maritime Emergencies were tested to assemble towing connections and tow the the ultra-large container vessel on different courses. Photos: http://www.havariekommando.de/presse/gallery.php.html?file=bildergalerie/2015_06_13/index.html&oid=9036&tsize=1 CMA CGM Jules Verne (IMO number 9454450 and MMSI 228032900) was built in 2013. The 186,470-DWT vessel has a lenght of 396 m.

CMA CGM Jules Verne will be deployed on P3' Far East - Europe: here is an update

As reported earlier, the proposed Far East to (Northern) Europe network of the P3 will consist of eight weekly loops. This compares to the present set up of nine loops for Maersk, MSC and CMA CGM. The one-loop reduction will not have any meaningful capacity effect since larger ships, mainly in the form of 18,270 teu Maersk-EEE classes, are being phased-in successively. The P3 service restructuring will see consolidation of Southeast Asia transhipment hub calls toward Tanjung Pelepas, at the expense of Singapore and Port Kelang. Two services, the ‘Baltic / FAL7 / AE8′ and the ‘Skaw / FAL8 / AE9′ will feature direct calls in the Baltic Sea. One of the loops will reach as far as Poland, while the other will only call at Gothenburg, Sweden. Maersk Line had pioneered direct calls in the Baltic Sea with large Asia-Europe mainline tonnage, but the participation in such slings is new for MSC and CMA CGM. The low number of calls at Rotterdam, Europe’s largest container port, comes as a major surprise. Depending upon the future patterns of feeder services and on-carriage, both Antwerp and Bremerhaven appear to benefit from the changes. Most other ports will roughly see the same number of calls as now (or one less call because of the overall reduction in loops). Full detail: http://linervision.wordpress.com/2013/10/22/p3-setup-update-far-east-europe/