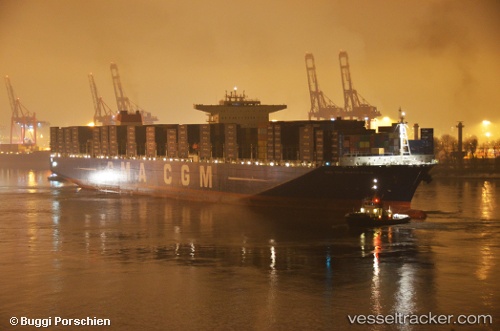 The 'CMA CGM Marco Polo' was refues to enter Algeciras upon its arrival from Southampton on March 30, 2020, after the Master had reported one sick crew with fever symptoms. The ship was moored at the Gibraltar West Anchorage in the morning, waiting for a virus test result. The rest of the crew was undergoing constant health checks and have also been tested.

CMA CGM, the world’s third largest container shipping Group, offers a one-of-a-kind experience to journey across oceans, seas and continents on a “Cargo cruise”. CMA CGM Group is now offering genuine cruises aboard its biggest vessels, the new 16,020 TEUs containerships, such as the CMA CGM MARCO POLO or the CMA CGM ALEXANDER VON HUMBOLDT. These giants of the seas (365 meters long, which is equivalent to more than 4 soccer fields), are among the largest vessels of their kind in the world. The company’s containerships offer their passengers five cabins with private bathrooms and their own living-room. Passengers can also enjoy the large range of facilities provided on board, such as a theater for movie-fans, a library for readers, or a fitness room for the most energetic ones. During summer time, they will all have a chance to benefit from the outdoor swimming-pool. All meals are prepared by the Chef and his Maitre d’Hotel, and are shared with the crew. Passengers are invited to the Captain’s table, turning every meal into a sharing and an exchange opportunity with him and his crew.

Nine Vessels built by DSME were selected as the best ships of 2012. As a result of this year’s achievement, DSME has now had more than nine ships selected for the fifth consecutive year. The world’s four biggest magazines exclusively dedicated to shipbuilding and shipping select the best vessels annually. Four ships were chosen as significant ships of 2012 by the UK magazine ‘Naval Architect’ and two ships were selected by ‘Fairplay Solution’. The ‘Marine Log’ and the ‘Maritime Reporter’, both from USA, each chose three ships as their distinctive ships of 2012. The highest ranking ships were four crude oil carriers and three containerships. One product carrier and one passenger ship was also selected. ‘CMA CGM Marco Polo’ was selected by all three magazines. She is 397m long, 53.6m wide, and able to be loaded with 16,020 TEU containers. It is currently the world’s biggest container ship so last year BBC and other members of the press focused on her first entry to Southampton’s port. More at http://www.seanews.com.tr/article/worldship/94322/Best-Ships--built--DSME--News-by-topic--NINE--SELECTED--vessels.-/