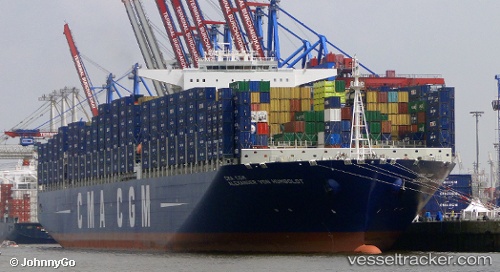 Biggest container ship of the world christened in Hamburg

The "CMA CGM Alexander von Humboldt" was christened by the 2nd Mayor of Hamburg, Dorothee Stapelfeldt, in the evening of Mar 30, 2013, at 8.50 p.m. at the Athabaska Quay. A firework was to conclude the festivities around 10 p.m. German report with photos: http://www.radiohamburg.de/Nachrichten/Hamburg-aktuell/Panorama/2013/Mai/Alexander-von-Humboldt-Containerriese-in-Hamburg

The CMA CGM Group is pleased to announce that the CMA CGM ALEXANDER VON HUMBOLDT, second of the world's largest and state of the art containership’s series, begins its first voyage today, Friday, April 19th in Pusan, South Korea, the French carrier's press release said. Built by DSME (Daewoo Shipbuilding and Marine Engineering) in South Korea, this giant of the seas, owned by CMA CGM, displays exceptional dimensions: 396 meters long, 54 meters wide, with a draft of 16 meters and sails under the UK flag. In line with the sustainable development policy of the Group, the CMA CGM ALEXANDER VON HUMBOLDT is equipped with all the latest environmental technologies. The CMA CGM ALEXANDER VON HUMBOLDT is the second of a series of three 16 000 TEU vessels, all to be named after great explorers. The delivery of the third vessel of the series, the CMA CGM JULES VERNE, which will sail under the French flag, is expected at the beginning of May 2013.