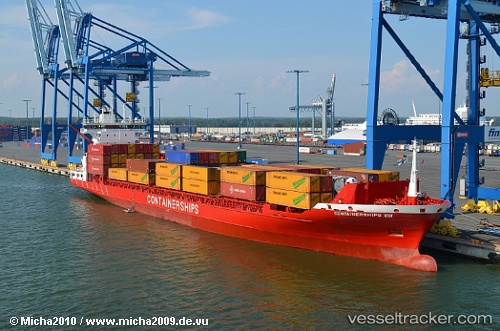 Engine trouble in the North Sea

Enroute from Teesport to Bronka the 'Containerships VIII' suffered a leak in the cooling system and a damaged cylinder head in pos. 52 27 18.6 N, 002 55 46.8 E on Sep 19. The vessel dropped anchor, and the leak was fixed by the crew. The ship requested another eight hours to fix the damaged cylinder head. At 3.40 p.m. the ship rescumed its voyage with an ETA as of Sep 24 upon completion of repairs.

Enroute from Rotterdam to Helsinki the "Containerships VIII" was disabled by an engine failure during the transit of the Kiel Canal on Jan 21, 2017. The ship was stuck at Breiholz. The crew managed to restart the engine two hours after the trouble occurred after the exchange of the fuel pipe, and the vessel continued the voyage, arriving in Helsinki on Jan 23 at 7 a.m.