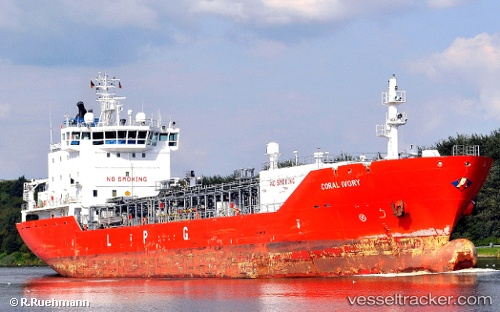 The german BSU (Federal Bureau of Maritime Casualty Investigation) has published the investigation report regarding the collision between the "Siderfly" and "Coral Ivory" on Oct 28, 2013 in the Kiel Canal. Download in English language: http://www.bsu-bund.de/SharedDocs/pdf/EN/Investigation_Report/2016/Investigation_Report_330_13.pdf?__blob=publicationFile

In the morning of Oct 29 representatives of the Casualty Command Cuxhaven, the Water Authority Brunsbüttel, the insurers and salvage companies met in Brunsbüttel to discuss the further proceedings regarding the salvage of the "Siderfly". The canal remained closed at least until midday. About 40 ships were waiting for transit on both sides of the canal in Kiel and Brunsbüttel. The "Siderfly" had continued to move in the run of Oct 28 so that a short term reopening of the canal was too dangerous. Water was seeping into both cargo holds of the ship which was carrying urea. Divers were unable to start patching the leaks as the ship remained too unstable and they would have to work underneath the listing hull. Only special trained boarding teams were allowed to work on the deck. In the night hours the tug "Luchs" which had secured the "Siderfly" jointly with the "Wolf" since the accident, was exchanged by the stronger "Bugsier 20". Also the "Bugsier 15" was called, and the salvors of Bugsier were preparing the sheerleg "Enak" in Bremerhaven which, however, will only be able to sail to Brunsbüttel when the wind has subsided. Jointly with Bugsier the Brunsbüttel based salvage company Hans Schramm was on scene with the tug "Helmut", anchors and salvage equipment to support the workers of the Water and Shipping Authority Brunsbüttel with their crane ship "SG 1353" and the work boat "Mittelgrund". It was unclear how much gas oil had spilt out of a breached tank. The wind had blown the contaminated water over the oil barriers the fire rescue had laid out around at the ferry pt. Kudensee The "Coral Ivory" was investigated by the police Brunsbüttel at its berth at the railway pilings. The ship had left the communal port Ostermoor with a cargo of ammoniak when it ran into the foreship of the "Siderfly" while heading into the fairway. It only suffered scratches at the foreship and the bulbous bow. Its crew was questioned by the police. German report with photos: http://www.kn-online.de/Schleswig-Holstein/Aus-dem-Land/Nord-Ostsee-Kanal-weiter-gesperrt

Cargo ship hit by tanker in danger of sinking

The cargo vessel “Siderfly” which was breached on port side on its way to Antwerp in the collision with the “Coral Ivory”, which was enroute Terneuzen-Uusikaupunki in the Kiel Canal at km 6,5 south of Kudensee at 3 a.m., was in danger of sinking and listing 45 degrees to port in the morning. Both lock pairs in Kiel and Brunsbüttel were closed after the acident. The bulbous bow of the tanker had caused two leaks of 3x5 meters. The vessel was pushed onto the embankment, and salvors tried to stabilize it. Oil booms were laid out. None of the on the whole 29 crew members were injured. The “Siderfly” had on board nine Ukrainians and Russians, the „Coral Ivory“ a Dutch captain and 18 Russians and Ukrainians. Both ships were said to carry fertilizers as cargo. The German casualty command meanwhile took over the coordination of salvage work. German reports with photos and video: http://www.kn-online.de/Schleswig-Holstein/Aus-dem-Land/Auf-dem-Nord-Ostsee-Kanal-sind-am-fruehen-Montagmorgen-zwei-Schiffe-zusammengestossen http://www.ndr.de/regional/schleswig-holstein/schleusenok103.html http://www.shz.de/schleswig-holstein/panorama/schiffe-kollidiert-nord-ostsee-kanal-gesperrt-id3901726.html http://www.mopo.de/umland/montagmorgen-schiffe-auf-nord-ostsee-kanal-kollidiert---vollsperrung,5066728,24805308.html http://zeitungen.boyens-medien.de/aktuelle-nachrichten/zeitung/artikel/nok-siderfly-mit-starker-schlagseite.html http://www.spiegel.de/panorama/sinkender-frachter-nach-kollision-auf-nord-ostsee-kanal-a-930387.html