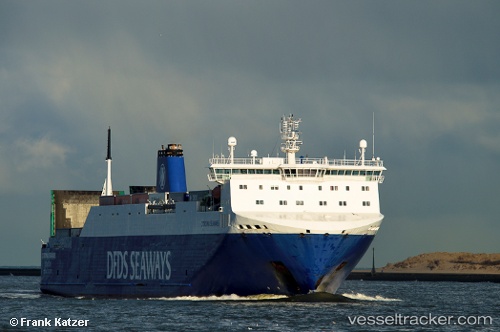 The fire aboard the "Corona Seaways" on Dec 4, 2013, off Helsingborg was caused by the starter of a truck , the British Commission of Inquiry concluded its investigation of the accident. The truck had been purchased from a scrap trader in Jutland for transport to Lithuania. The truck had standing for a year so that a temporary battery was installed to get it aboard the ship. The fire rescue service of northwest Skåne fought the fire for almost a whole day at the dock in the Skåne terminal in the port of Helsingborg. When the ship left the port of Fredericia in Jutland, everything looked to be an ordinary sailing to Klaipeda. But five hour into the trip there was fire alert. The crew fought the blaze for four hours before firefighters boarded the vessel in Helsingborg and were able to extinguish the fire. The ventilation slots that had to be fully closed before the internal fire suppression system was activated, were not fully sealed. This meant that it was not as effective as it otherwise would have been. In addition, the activation of the system was delayed for five minutes since a fitter was suspected to be inside the car deck. When he was located, the system was activated with good results. But the fire was not extinguished completely, so that the ship headed to Helsingborg where emergency services were ready to knock down the blaze. As a result of the accident the owner introduced additional, more stringent rules than before about how used and not inspected cars have to be handled when they are loaded on board. For example all the cables from the batteries in the vehicles are unfixed before the trip starts. On the whole, the British Commission of Inquiry concluded that the accident was handled in a professional manner and as good as possible, regarding both by the crew and the shore-based emergency services in Helsingborg. The damage to the ship mainly hit the area above the fire. Some 15 square meters steel had to be replaced, other work included replacement steel structures and electrical wiring. Three vehicles and six trailers were also damaged in the fire. Swedish report with photos and videos: http://hd.se/skane/2014/09/25/startmotor-orsakade-fartygsbrand/

A fire hit a DFDS ferry off Denmark last year because of a faulty truck ignition system. A report by the UK Marine Accident Investigation Branch (MAIB) said the blaze was discovered on the main deck of the 25,600-gt Corona Seaways (built 2008) while the vessel was on passage in the Kattegat from Fredericia to Copenhagen on 4 December. The crew mustered, closed the ventilation louvres, established boundary cooling and operated the fixed CO2 fire-extinguishing system. "Although smoke continued to escape from the louvres, steady temperatures in the vicinity of the fire indicated that the CO2 had been effective in controlling it," it added. Four hours later the vessel entered the Swedish port of Helsingborg. It suffered light structural damage and the loss of some minor electrical supplies. Three vehicles and six trailers were severely fire-damaged and other vehicles suffered minor radiant heat damage. Recommendations have been made to the management company to review its onboard instructions to take account of revised procedures introduced by the operator for transporting used and unregistered vehicles. Source : tradewinds

On Dec 13 the "Athena Seaways" arrived at Fredericia, where she replaced the "Corona Seaways" on the Fredericia - Klaipeda route until Dec 19 December, while the latter is in the shipyard in Landskrona for repairs of fire damage. The "Athena Seaways" had already been on its way from the Mediterranean to the Baltic Sea in order to get ready for service for the DFDS.