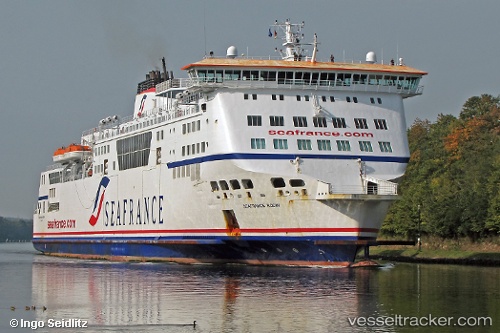 On March 28, 2020, a DFDS employee was emedevacoed from the 'Côte des Dunes' at the port of Calais. For several days, the mechanic had been complaining of headaches and he also lost his sense of smell. However, as he was not in respiratory distress, he was not transferred to the hospital but to his home for a fortnight. There was a risk that he will be infected with the coronavirus. Since then, employees have worried about their health.

The "Côte des Dunes" joined DFDS Calais-Dover route on Feb 9, 2016, enhancing DFDS’ daily schedule of sailings between Dover and Calais to up to 30 per day. DFDS’ three ferries on the Dover-Dunkirk route now operate the largest fleet on the Dover Strait, with up to 54 daily sailings to the two French ports. The "Côte des Dunes" has undergone a complete transformation since DFDS took delivery of her at the end of 2015. EThe ferry is painted in the new DFDS livery, which includes the company’s updated logo and darker blue colour palette. Internally, the ship has been extensively renovated with numerous cafes and bars, a self-service restaurant named 7 Seas and a large shop with a variety of offers on holiday essentials and luxuries. Other facilities include a dedicated children’s play area complete with play equipment and a large screen television. Report with photo: http://www.breakingtravelnews.com/news/article/cote-des-dunes-joins-dfds-calais-dover-route/

On Nov 30, 2015, the "Cote des Dunes" was towed to a shipyard in Dunkirk after she was broken off her moorings as a result of strong gusts of wind during the weekend. The ship had allided with the pier at which it was secured and suffered a breach in the hull measuring several meters. Also other parts of the hull as well as the bulb and stern were damaged. No injuries were reported among the crew members who were on board. After repairs, the "Rodin" will be repainted and refurbished after the recent occupation which caused a damage estimated to be about 2 million Euro. French report with photo: http://www.nordlittoral.fr/calais/voie-d-eau-sur-le-rodin-qui-a-rompu-ses-amarres-ia0b0n264225