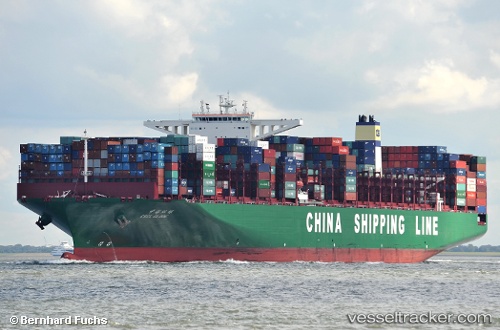 The 19,100 TEU CSCL Globe made its maiden call at the Port of Hamburg on Jan 13 as it continues its maiden voyage from China to Europe. The CSCL Globe is the first of five similar ships being built by Hyundai Heavy Industries Co. in Ulsan, South Korea for China Shipping Container Lines and was delivered in November 2013. Whether or not CSCL Globe is considered the world’s biggest cotainership by carrying capacity is up for debate. Last week, the MSC Oscar with a capacity of 19,224 TEUs was launched at the DSME shipyard also in South Korea, which would technically give it the title of world’s biggest. Regardless, CLSC Globe is massive, measuring 400 meters in length, 58.6m in wide and 30.5m in depth. Here’s a video from the Port of Hamburg on the CSCL Globe’s maiden call there: https://www.youtube.com/watch?v=6acrgeBfYtQ

A grand ceremony was held as scheduled on Saturday at the port of Rotterdam to welcome the world's biggest container ship, the CSCL GLOBE owned by China Shipping Group, though the vessel on her maiden voyage was held miles away from the port due to 7-10 gale wind and 4-meter-high waves roaring above the sea waters. Setting off from Tianjin, China, last December to embark on its first voyage on the Asia-Europe trade loop, the CSCL Globe measures 400 meters in length and about 60 meters wide, or the size of four soccer fields, Xiaowen Huang, deputy general manager of China Shipping Group, told the welcoming audience. In spite of its extra carrying capacity, 19,000 twenty-foot equivalent unit (TEU) shipping containers, the CSCL Globe's electronically-controlled main engine, which automatically adjusts fuel consumption based on the ship's speed and sea conditions, allows the ship to burn 20 percent less fuel per TEU than ships with 10,000 TEU capacity, he added. It will then set off for Hanburg in Germany and Zeebrugge in Belgium before coming back to Rotterdam in mid-January for uploading. Source : Global Post

The world’s largest container ship arrived in the UK for the first time on Jan.7. The Hong Kong-registered CSCL Globe docked at Felixstowe loaded with about 19,000 standard containers. The previous largest ship to have docked at the port was the Maersk Triple-E, which arrived in November, carrying about 18,000 containers. The new ship, which left China in December, arrived on the Suffolk coast at 13:00 GMT on Jan.7. The CSCL Globe docks at Felixstowe’s deep-water berths eight and nine, which were opened in 2011, at a cost of £300m. The port said ships of this size would not be able to use Felixstowe if it had not made this investment. It is carrying a large range of consumer goods including food, drink, clothing, electrical goods and furniture. The ship’s last port of call was at Kelang in Malaysia. Report with pictures: http://www.telegraph.co.uk/finance/newsbysector/transport/11330899/A-quarter-of-a-mile-long-and-arriving-here-now-the-worlds-biggest-ship-docks-in-Britain.html