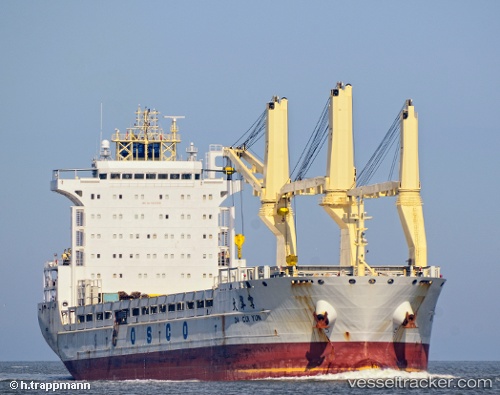 On Feb 20, 2020, the 'Da Cui Yun' was released from arrest at Kandla after providing a bond, as well as offloading the suspected military cargo on board. It then headed to its next port of call Qasim. The Pakistan government had issued an official statement about the arrest of the vessel at the Deendayal Port in Kandla on the allegations by Indian authorities regarding a heat treatment furnace casing system which has several industrial applications. It was not listed in any international export control list. Contrary to what was being claimed, the item was correctly declared in the relevant documentation and there was no attempt to hide or conceal any information. Claims regarding the possible military dimension of the held item were factually incorrect.

The 'Da Cui Yun' which had been detained by Indian customs officials at Deendayal Port, for allegedly carrying an autoclave, and also mis-declaring it, almost managed to leave India in the night of Feb 4 to Port Qasim in Karachi. Customs officials seized the suspect cargo from the vessel. It has been moved away from Jetty 16, where it was berthed earlier, to the anchorage area of the port. There was a strong chance of the ship’s papers also being seized. The next course of action depended on the government Kandla Port authorities issued a no-objection certificate after verifying it had no dues as per the norm. An onward-sailing memo was issued for Feb 4. A pilot to guide the ship out of the harbour was put on standby at the request of the captain. Then Senior Kandla Port officials got calls from New Delhi. Officials of the Directorate of Revenue Intelligence (DRI) and other security agencies reached Kandla. Officials from the national security establishment were part of the team. The customs authorities, who were about to issue final clearance for the vessel to set sail, backed off. On February 5, a ship chandler put in a request to bar the pilot and the vessel out of the harbour. The DRDO report will be crucial in determining the next step. After the 'Da Cui Yun' had arrived in Kandla she immediately offloaded 2,480 tonne of machinery. While DRDO scientists examine the equipment, investigators were also interested in the ship’s charter. Prior to sailing from Jiangyin port on the Yangtze river in China’s Jiangsu province, the vessel had berthed in Shanghai for five days and also passed through Nantong Port in Jiangsu province. The tip-off, came from Hong Kong to the highest levels of Indian intelligence. Indian operatives were believed to have sent a message that the ship could be carrying dual-use technology products — those that can be used for both civilian and military purposes. The US has also been maintaining a close watch on the Chinese shipping companies after it imposed sanctions on Iran, but it wasn’t immediately clear whether the US provided any intelligence. After the ship was prevented from leaving, an inspection by the customs department found that the declaration on the nature of cargo wasn’t matching. It appeared the vessel violated the Special Chemicals, Organisms, Materials, Equipment and Technologies (Scomet) regulations.

The 'Da Cui Yun' being suspected of carrying military arms, was detained following its arrival at the port of Kandla on Feb 3, 2020. The vessel was being searched by Indian customs official and intelligence agencies. It arrived at Kandla from China and its next destination was to be Karachi. The search on the vessel commenced on Feb 8, because there were suspicions that the vessel may be carrying arms. Indian Security and Customs Agencies found some essential parts for missile launchers, capable of launching solid fuel powered nuclear missiles and an industrial dryer of 18 meters length, and Indian authorities believed it was a part of missile launcher. The investigation continued as of Feb 18.