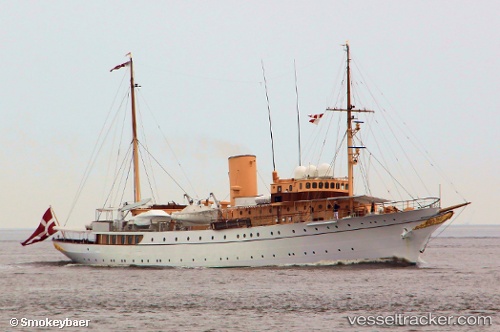 On July 26, 2021, around 6 a.n. the 'Dannebrog', a helicopter and several other units have been deployed to a distressed cutter with two crew members on board southeast of Hjelm in the Kattegat which was about to sink. The "Dannebrog' was in the area and diverted to the scene. Barely three hours later, the cutter was found northeast of Hesselø, still floating. Rescuer were sent on board to look after the two sailors.. On July 24, the Danish Queen had boarded the royal ship in Copenhagen. On July 25 it sailed towards Aalborg.

After the "Dannebrog" visited Helsingør on March 3, 2017, at 4.15 p.m.problems occurred when leaving the quay again. The "Dannebrog" was pushed against to the dock by the wind and could not get away again with own power. the DSRS was therefore requested to pull away the "Dannebrog" from the dock. An hour later the lifeboat was back on its station. Danish report with photo:: http://dsrs.dk/en-kongelig-assistance

On July 21, 2013, a fishing boat hit the "Dannebrog" in the port of Rudkøbing. The cutter came a little too close and broke the flagstick of the royal yacht while heading out of the harbour where the yacht was anchored. The deputy commander of the royal yacht, Steen Picture Jensen, started to investigate the issue. Danish report with photos: http://nyhederne.tv2.dk/article.php/id-70202975:kongeskibet-fik-kappet-flaget-af.html