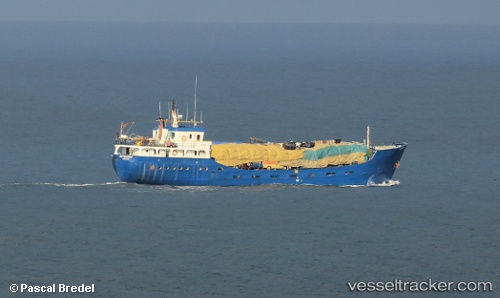 Two ships reefed on one day

On June 23, 2018, the sinking of the "Lady Philomena" and the tug "Everglades", 141 gt (ex-"Joan Turecamo", 141 gt (ex "Matton 25"; built 1956 John E Matton & Son Inc., Cohoes), IMO: 6515875, took place nine miles east of Volusia county in the Atlantic Ocean after waiting for months for fair seas. More than 70 boatloads of people turned out to watch the ships become the latest additions to Volusia County’s artificial reef system. After nearly two hours of seawater being pumped into the hold, the "Lady Philomena" began to list to starboard side. Once the ocean water began to flow in through large holes cut into the side, the ship began to list still more. Then, within just a few minutes, the vessel righted itself and sank perfectly straight up at 11 a.m. The "Everglades" followed minutes later, in a little more dramatic fashion. The tug’s stern sank first, falling straight toward the bottom, landing in a vertical position with the bow sticking straight out of the water. Then the bow splashed backward and disappeared, sending a rush of bubbles to the surface. The vesels sank to the bottom in about 70 feet of water on the county’s reef site 12 in pos. 29°11.587'N, 80°46.129'W. Cheers and applause and horn blowing heralded the sinking of each ship. Reports with photos and video: http://www.news-journalonline.com/news/20180623/2-ships-sunk-miles-off-coast-become-volusias-latest-artificial-reefs https://www.youtube.com/watch?v=bnT2BZ3RHnc

The sinking of the "Lady Philomena" and the tug "Everglades" is planned for June 23, 2018 weather permitting. The Volusia County Council and the Coastal Division have the ships staged for deployment as artificial reefs in New Smyrna Beach at the Swoop boat ramp. The ship and tug will be deployed one right after the other in close proximity to one another at Volusia County Reef Site 12. They will be towed offshore in advance in the evening of June 22 or overnight and moored at the deployment site. The eployment location will be verified on-site on June 23 at 8 a.m. where flooding of the cargo ship will commence. The sinking will take place between 9 a.m. and 10 a.m. Then the flooding of the tug will start and it was targeted to sink between 11 a.m. and noon. A Volusia County Beach Safety vessel and officers will maintain a restricted perimeter around deployment operations at all times.

The "Lady Philomena" and the tug "Everglades" will have one final voyage over the next week, a trip nine miles east of Daytona Beach where they willll be sunk as artificial reefs. But before they become the newest additions to Volusia County’s growing artificial reef network, the ships will be open for public tours on Nov 12 and 13, 2017. Divers anxious to see what sort of adventure awaits, fishermen angling for a little closer look, and curious onlookers who won’t ever make the trip 80 feet down are expected to visit the county’s two-day “Beneath the surface” celebration. Visitors will be able to stroll the decks of both ships, peering into the former engine rooms and cabins, between 10 a.m. and 3 p.m. on both days at Down the Hatch Restaurant and Marina, 4877 Front St., Ponce Inlet. The ships have been thoroughly cleaned, stripped of all their electrical wiring, fuel tanks and oily residues during weeks of work at McCulley Marine in Fort Pierce. Final touches will be completed over the next few days, including the cutting of holes in the hull so the ships can be quickly flooded for their trip to the bottom of the sea. The Volusia County Reef Research Dive Team, Coastal Conservation Association Florida, and U.S. Customs Enforcement, Customs and Border Protection Service are among the groups that plan special exhibits for adults and children alike during the two-day open house. The Customs Service donated the "Lady Philomena" to the county after confiscating the ship in a Miami drug bust. The sinking of the "Lady Philomena" and the "Everglades" is expected to take place next week, when the weather is clear and ocean conditions are calm. The ships will join another dozen steel ships and barges that are part of the county’s reef system creating a ecosystem on the bottom of the ocean, attracting thousands of fish The reef program began in 1980, with the sinking of the USS "Mindanao". Today the county has 148 reef structures on more than a dozen state and federally permitted sites offshore. Report with photos: http://www.news-journalonline.com/news/20171109/future-artificial-reefs-open-for-tours-in-ponce-inlet