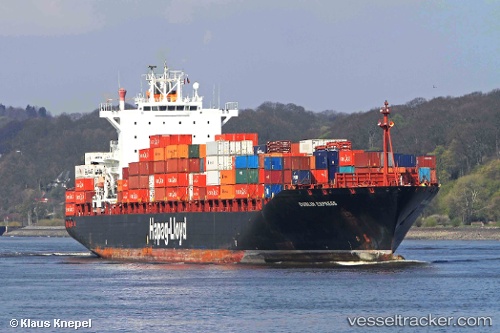 The US Coast Guard cleared the "Dublin Express" for departure from New York Container Terminal in Staten Island in the morning of April 3. The departure was approved following completion of repairs and cleaning of the vessel. The Unified Command, consisting of state and federal agencies and the responsible party, continued cleanup operations until all impacted parts of the Arthur Kill Waterway have been fully restored. Cleanup operations in Jacob Riis Park concluded on April 2, and there’s been no new reported impacts in that area. Shoreline Cleanup and Assessment Technique (SCAT) teams identified a small amount of tar balls in Atlantic Beach and are evaluating them to confirm the source. The Coast Guard continued to monitor the area with local stakeholders. Through evaluation of data collected on board by Coast Guard marine investigators and additional data provided by vessel representatives, the Unified Command believes that up to 100,000 gallons of heavy fuel-oil were released by the vessel during its transit along the East Coast to New York. The Unified Command reports the amount of oily-water recovered in the Arthur Kill Waterway was approximately 35,000 gallons. A fourth oiled bird was recovered and transported for rehabilitation to Tri-State Bird Rescue and Research.

The Unified Command for the Goethals Oil Spill positively identified that tar balls recovered from Jacob Riis Park correlated to the fuel oil discharge caused by the "Dublin Express" on the Arthur Kill Waterway on March 28. The U.S. Coast Guard Marine Safety Laboratory completed fingerprinting of the tar balls, verifying the recovered oil was found to match the vessel as the source. The Unified Command deployed personnel and assets today to perform cleanup operations in impacted areas of Elizabethport Reach, including Elizabeth Marina, New Jersey, and Jacob Riis Park, New York. Cleanup crews worked along Rockaway Beach Monday cleaning up tar balls that shoreline cleanup and assessment technique (SCAT) teams found Sunday. A total of 87 people along with 16 boats were working in the field. Although NOAA trajectories did not predict further impacts, Unified Command continued to monitor the area through local stakeholders. Cleanup operations in Arthur Kill Waterway were ongoing since the incident occurred. Shoreline assessments in New York and New Jersey areas have continued since last week, and there have been no reports of additional impacted areas. Members of the Unified Command continue assessing wildlife in the area. To date three oiled birds – one domestic duck and two ring-billed gulls – have been captured in New Jersey by personnel from Tri-State Bird Rescue and Research. The public was urged to not approach or attempt to rescue any impacted wildlife, which may further harm the animal or cause distress to the animal. The cause of the incident remained under investigation by U.S. Coast Guard. The "Dublin Express" sailed from New York, after the hull was patched, on April 4 at 1.50 p.m. and berthed at the Baltimore Marine Container Terminal on April 5 at 1.40 p.m. Report with photo: https://coastguardnews.com/unified-command-identifies-oil-clean-up-operations-continue/2019/04/03/

The U.S. Coast Guard, along with partner agencies on March 29 responded to reports of oil sheen and tar balls on the ocean side of Coney Island and Long Island, from Norton Point to Atlantic Beach. They were assessing both shoreline and waterway impact, and investigating to determine the source and cause of the condition, including a possible connection to the fuel-oil leak involving the "Dublin Express" in the Arthur Kill waterway which had a damaged tank with has the capacity to carry approximately 300,000 gallons fuel-oil. The cause of the damage and the amount of fuel oil spilled have not been determined and remain under investigation.