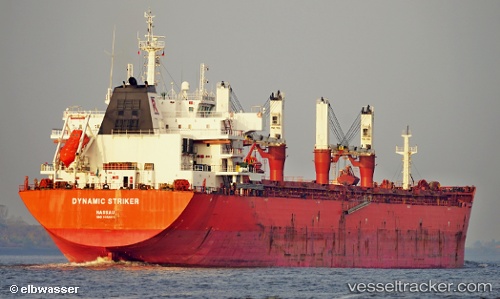 The captain of the "Dynamic Striker" has confessed that they were trying to flee from Indian waters and moving towards Port Fujiriyah in the United Arab Emirates. When asked why they did this despite several warnings issued by the Port Trust, the Coast Guard and the navy, Sergiy said that he was only following the orders of his superiors from the shipping company that owns the ship. A team from the Ukraine consulate general’s office visited the Yellow Gate police station along with its lawyer. They were allowed to meet the arrested accused and they were satisfied with the investigation being carried out. The other three arrested — the vessel’s radio officer, deck officer and chief engineer — were arrested as they did not try to stop the captain despite knowing that several alerts and signals were sent by maritime and security agencies.

Anonymous source said there are unconfirmed rumours, that London Court ruled not to offload cargo as cargo owner, company Ispat industries, failed it’s obligations under the contract. Vessel stayed in Mumbai from Oct 28, and ran out of food and fresh water. Full update incldn media news at: http://www.odin.tc/eng/articles/908-Bulk-carrier-Dynamic-Striker-and-crew-arrest-update-and-some-explanations-as-to-grounds-of-the-story.asp

Four Ukrainian crew members of the "Dynamic Striker" have been arrested. Among them were the captain, the chief officer, the chief engineer and the deck in-charge who were held last night. The four on Nov 25 appeared before a local court which remanded them to police custody until December 2. The accused were booked under IPC section 34 (Acts done by several persons in furtherance of common intention), 186 (Obstructing public servant in discharge of public functions), 280 (Rash navigation of vessel), 336 (Act endangering life or personal safety of others), 353 (Assault or criminal force to deter public servant from discharge of his duty) and 407 (Criminal breach of trust by carrier, etc). There were 22 crew members from Ukraine and Russia on the ship.