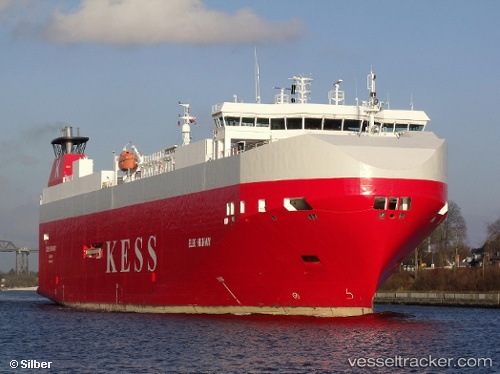 Five people have been arrested after a Greenpeace protest saw activists climb aboard the "Elbe Highway" carrying VW diesel cars. Two men and a woman were apprehended at Sheerness port on Sep 21 after 40 people removed thousands of keys from cars in the port's import park. Two more women were arrested on suspicion of aggravated trespass on Friday. They were being held in custody. Volkswagen said the keys had since been returned. On Sep 21 , police arrested a man, 51, from Epsom, Surrey, on suspicion of aggravated trespass. A woman, 36, from Stoke Newington, London, and a man, 46, from Cleveley, Oxfordshire, were also arrested under the Merchant Shipping Act 1995 on suspicion of entering a vessel. All three were bailed until Oct 19. The ship contained a variety of Volkswagen Group vehicles, including petrol, diesel and plug-in hybrid models. It left Sheerness after the protest and was anchored off Margate before it returned on Sep 22 to dock at Sheerness. The group had wanted Volkswagen to agree to return the cars to Germany, but campaigners claimed they had forced the cargo ship to turn round on Sep 21. Peel Ports, which owns Sheerness port, confirmed Greenpeace protesters had illegally entered secure areas.

On Sep 21, 2017, the "Elbe Highway" as been boarded by 25 protesters from the environmental group Greenpeace at Sheerness. The ship was bringing new Volkswagen Group petrol, diesel and plug-in hybrid cars from Emden which have been the target of a protest by Greenpeace. The protesters climbed aboard the ship in an attempt to stop the unloading of the cars it was carrying and demonstrate against the much publicised VW emissions scandal. The protesters suspended themselves from the ship’s 27-meter high unloading doors, unfurled a 50 square meter banner showing a girl in an air-pollution mask and said they would remain there until Volkswagen agreed to return the cars to Germany. The "Elbe Highway" was subsequently moved away from the Port of Sheerness to anchor off Margate. Police became aware of the protest at the Thames Estuary port shortly before 9 a.m. and attended the scene where they found an additional 41 protesters had scaled the fence and entered secure areas of the port itself where large numbers of new cars are parked awaiting distribution. In a statement, Greenpeace was attempting to immobilise all the diesel cars by removing their keys. Volkswagen said, the diesel vehicles, which wer ethe subject of the protest meet strict Euro 6 emissions standards. German report with photo: http://www.waz-online.de/VW/Aktuell/Greenpeace-blockiert-Autofaehre-mit-VW-Neuwagen

Enroute from Bremerhaven to Malmö the "Elbe Highway" allided with the Kiel Canal lock in Brunsbüttel on Apr 17, 2016, around 9 a.m. due to a wind gust. The ship was damaged above the water line and berthed at the southern Navy Dolphins in Brundbüttel for further surveys of the hull with divers. She was allowed to continue the voyage around 9.15 p.m. and has an ETA at Malmö as of Apr 18. German report with photo: http://forum-schiff.de/phpBB3/viewtopic.php?f=2&t=23#p125247