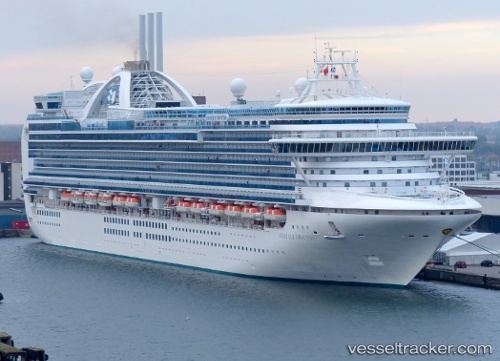 On Aug 8, 2022, a medical emergency was reported on board the 'Emerald Princess' which was was bound for Edinburgh after leaving Invergordon in the evening after a person fell ill and needed to be medevaced. The Invergordon RNLI lifeboat 'Agnes app Barr' was launched and headed to the ship which had stopped at the Moray Firth Fairway Buoy.Two specially-trained crew members of the lifeboat transferred the patient on board, and a senior medic from the cruise liner joined the team. The lifeboat made its way back to Invergordon West Harbour where an ambulance and Rapid Response Team was waiting along with the local coastguard. The patient was taken to Raigmore Hospital in Inverness for further treatment. The senior medic was taken back to the cruise ship which continued its voyage southbound.

in the morning of Oct 31, 2019, the Port Authority of Thira was informed about the death of a 74-year-old passenger of the 'Emerald Princess' which was coming from Piraeus. The body was to be disembarked at the port of Katakolos and then transferred to the Piraeus Forensic Service for necropsy-necrotomy.