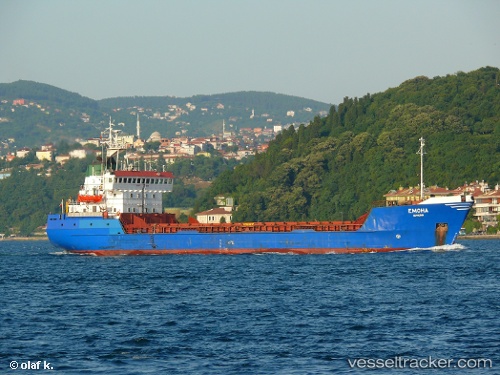 The 'Emona', en route from Hereke to Varna, suffered a technical failure at the Northern part of the Istanbul Strait on Dec 29, 2019. It subsequently returned to Büyükdere anchorage and dropped anchor. Repair works were carried out by the crew and the vessel remained stationary at position 41° 9.23' N 029° 2.92' E as of Jan 1, 2020.

The "Emona" suffered structural damages to the main deck handrails and hatch coamings at Gebze during discharge operation on Feb 5, 2019. The stevedore confirmed that repair of damages would be completed prior to the departure. On Feb 7 at 4 a.m. the ship left port, bound to Bartin, ETA Feb 9.

On May 29, 2018, the "Emona", having sailed from Varna on May 23, suffered a structural failure on hatch coamings and main deck handrails, while undergoing cargo discharge operation of steel scrap at Hereke. Repair works were to be carried out by stevedore duty teams, upon completion of discharge operation. The vessel berthed at the Diler Demir Celik Endustri ve Ticaret A.S. Liman Tesisleri in Gebze on May 30 at 12.45 p.m.